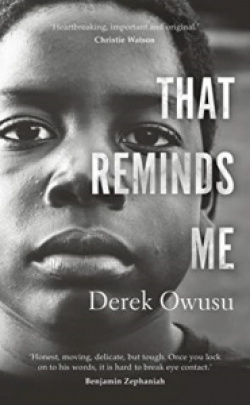 Derek Owusu has won the £10,000 Desmond Elliott prize for his novel-in-verse That Reminds Me. The book is a semi-autobiographical tale of a British-Ghanaian boy called K. Owusu is a writer, poet and podcaster from north London. Before turning his hand to fiction, he collated, edited and contributed to Safe: On Black British Men Reclaiming Space (Trapeze), an anthology of writing by 20 black British men.

◄ Poetry at the Parsonage, Haworth, 2016

'Learning to kill with her toes' ►

I’ve found the book on Kindle, but I’m rather disappointed to see it’s not verse at all but prose! Does nobody else but me write verse novels these days?

I wish I’d known about this competition! I’ve written 3 verse-novels so far. I’ll look for Derek Owusu’s one.