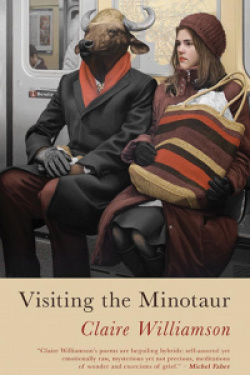 Processing bereavement and progressing along the difficult path of recovering trauma are the excruciating steps that delineate Clare Williamson’s poetry. Her mother and brother committed suicide and she was abused verbally and physically when she was a child. These  experiences are revisited and explored in her poems, which connect with ancient myths, mediated by pictures, dreams and lyrical visions. Her progress is slippery and she sometimes goes back or pauses, but the dynamic movement engendered by the poems reveals a relentless effort to survive at all costs. She is a survivor who narrowly escaped the destructive and self-destructive reality of her family and progressed towards a more mature understanding.

According to the myth, the Minotaur is eventually killed by Theseus, who is helped by Ariadne. She gives him a thread which he unravels to escape from the labyrinth once he has killed the beast. The myth has multiple, complex meanings; it not only refers to the bestial side of humanity that is defeated by the Greek hero, but also refers to the labyrinth as a symbol of the human journey, a confusing maze with a monster at the centre. Killing the Minotaur equates to killing the bestial side of humanity, which is also its most vital side. At the same time, to get out of the bewildering labyrinth some sort of trick or help is needed, which is exactly what Ariadne supplies to aid Theseus. While looking at Picasso’s picture, the poet eventually acknowledges that she is the Minotaur, but she also identifies with all the other figures present in the picture:

I’m here because I am the Minotaur,

the veil, the hand, the island,

the woman, the horse, the hooves,

the cave, the fist, and the death.

The poet’s experience encompasses all the aspects of the myth, from which she draws the strength to survive. The Minotaur is a multi-faceted, recurring image, apparently tamed in the first poem of the collection, when he dances with girls. But he is also misunderstood when he speaks in the first person. He remarks that he does not eat his victims, the 14 Athenian girls and boys offered to him according to the legend. But “They eat each other in the end,/caught in hunger’s fists,/not knowing they aren’t me” (‘The Minotaur speaks’). The myth clearly connects with sacrifice, where the ‘monster’ is doomed, as in ‘Tauromachia’:

this dance of life and death.

in the crowd’s collective moan,

meet in the sherry dirt.

There seems to be no way out for the bull, and maybe not for the poet either. However, she rises again after each fall, “clinging to a balustrade,/panting, as if on a precipice”. The progress is long and slow, as described in a masterly way in ‘The Spiral Staircase’:

I find myself thinking

about reaching the top,

attempting to climb a stair at a time.

to realise there is no

skipping a step. Each tread polished,

My hands clamp the bannister,

The grief of bereavement lingers through the collection, together with a constant effort to overcome it and defy death. The traumatic experiences the poet lived through within her original family are counterbalanced by the new family she creates with her two daughters.

She wonders “what it was/that stopped me from spinning out of control” (‘Brizzle’), what saved her from running away from home, from the dramatic events happening in her family, after she slept rough one night:

We almost rang the police. Almost.

why she’d rather spend the night

than be in bed at home.

The broken lines highlight the uncertainty and suffering of her situation. It is an inner agony that can only be compensated for by creative alternatives, that is, by giving birth and producing poetry, voicing her grief. Her daughters and her poetry are therefore the source of her rebirth. Giving birth can be painful but is repaid by the baby’s presence, which reassures her:

You come covered in thick sebum,

Bringing up and living with her daughters gives the poet new vitality, the reason to live and carry on, and she rediscovers the vibrancy of everyday life:

Under the troposphere of spruces

patiently in the pail –

work with the rhythm of ants

for a while, but this morning you

sit on my legs in the bath, while

I wash your hair. I hold a flannel

to your eyes to stop the soap-sting,

tumble your towel for a minute

in the dryer, making it cosy,

fold your hair in a super

The lines evolve smoothly in these poems, conveying a calmer mood in the pauses of the punctuation; they describe an ordinary scene with reassuring details. Within the collection a pantoum, ekphrastic poems and shape poems enrich and expand the themes and forms, giving a comprehensive quality to Williamson’s poetry.

The collection actualises progress in the poet’s life; she moves away from the traumatic experiences she underwent in her original family towards a creative new life that encompasses poetry and her new family. The poems reveal connections with myths and art that are reinterpreted in the poet’s personal and profoundly human vision expressed in compelling lines. The past cannot be changed but can be revisited with an increasing self-awareness and attempts at reconciliation.

◄ 'Her smile an invitation to join in her bliss'