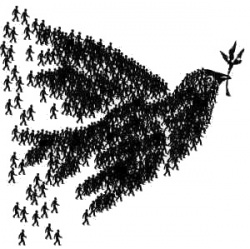 I will not be defined by ancient Gods,

or the archaic teachings in their books.

I will tread warily around their words

and avoid the hidden traps and snaring hooks.

I will not stand behind a coloured flag

and spout my blunt imperialistic views

or drape it on a coffin when I die

or burn it on the early evening news.

I will not make a choice that’s based on skin

or the way another human being speaks,

the way another human being struggles

to find the human touch a human seeks.

I will not blame a desperate refugee

for fleeing from a rocket spat war zone

and running to the safety of the west

and trying to find identity and home.

I will not be defined by lines on maps

or those, hastily drawn, across the sand,

for anyone can make a mark on paper

or claim a settlement as their homeland.

I will not be defined on where I live

or the destination of my birth.

I am not a citizen of land

but, rather, a child of planet earth.

You will not know me by my flesh and blood

or what is in my soul or in my mind.

I will not be identified by thoughts

for that is not the measure of mankind.

You will only know me for my words -

written, said and also what I do

and let me tell you something man of hate

there’s many more of us than there’s of you.

◄ The Making Of A Worker

Thanks to everyone for the comments and likes

My kind of sentiments exactly, Ian. And a well written poem too.

Noble sentiments - well put. But I'm troubled by this
recurring thought...
"When evil attends in spiteful might
Who still make a stand and fight?"

The sad thing is that the poor guy in Glasgow was a man of words too.