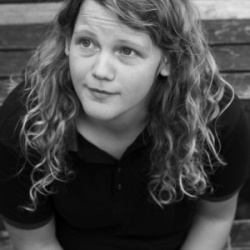 I’ll be honest, dear readers, I expected to hate this performance at Manchester’s Contact theatre as part of the literature festival. There is so much hype and bluster around Tempest, what with a Mercury nomination as well as poetry awards and garlands. Is she a poet, or a rapper, or a “performer” - whatever that is. Is she the greatest thing since the last big thing, or just an overrated south London oik with attitude? Harsh words - and when the show opened 20 minutes late I was toying with a “rock star poet turns diva” intro to my piece.

But let me tell you, if you don’t already know - Tempest is simply magnificent. She had me from the moment she walked onstage to rapturous applause (she already has a reputation at Contact, having stormed it earlier this year with Brand New Ancients while Prince played around the corner). She has a lovely, open face with a halo of golden hair, and a smile to melt the hardest critic’s heart.

She said she was thrilled to be back in Manchester, and I believed her. She talked to the audience as though we were mates – and I still believed her. She admitted she had planned to simply read from her latest collection, Hold Your Own, but got so carried away chatting to us that she walked off and made a second entrance before getting down to business.

Hold Your Own is her modern version of the ancient story of man/woman/child/blind seer Tiresias, followed by a sequence of poems that feed off its inspiration. Tempest delivered the first lengthy, mighty piece enthrallingly, a real teller of stories, barely an intake of breath, stalking the stage, face glistening with sweat, mic in hand, no reference to the book (she barely looked at the book all night).

There is a shopping trolley

There are some keys

There is a hawthorn

There is a horse chestnut

Is that blood or ketchup?

Bird in the branches

Light in the darkness

Tiresias is called on to settle a row about love and sex between Zeus and Hera:

Finally, when neither has

The strength to raise the anchor

And the ship of their relations

And they’re fighting over what the other

When Hera doesn’t like what Tiresias says, she strikes out and blinds him: "Zeus is shocked, appalled, impressed. / Mate he says Ah mate."

Tempest’s delivery is a tour de force and every word is thrown down like a stone to create a glorious, rocky picture. Her diction - sorry, one of my obsessions - is faultless, her rhythm spot on, and her sheer excitement infectious.

She said almost apologetically: “There’s a lot in this, it’s a lot to take in”, before reading some of the later poems in the sequence. In between she talked about her attempts to understand the world we live in - the word “dread” comes up a lot, and she says the only real weapon we have is "empathy". A world with more understanding, more kindness, more caring, more sharing, might just hold the awfulness at bay. Amen to that.

Tempest can write very tenderly, as in ‘For my niece’.

No flower bends its head to offer

teaching to a seed.

The seed will grow and blossom

Once the flower’s ground to dust.

But even so, if nothing else,

Doing what you please

Is not the same

as doing what you must.

She is funny as with ‘Snakes in the grass’, which is too long to quote here but hilarious. Or the bitter truth of ‘Some couple’, about the irritation of seeing loved-up people in the street when you have just had a row with your partner. She urges teachers to be the inspiration for the next generation instead of the dead hand of conformity and dullness, before reading ‘School’:

We wander into school, happy children:

We don’t know yet the horrors of the building,

The hatred it will teach. The boredom it will bring.

She has good advice for women – don’t read women’s magazines, they screw you up. A lot of her most wry lines are delivered with a knowing look at the audience. And Tempest knows full well that the bluster around her can be a pain: “All this hype and nonsense will go away soon”, she tell us with a smile.

I can only urge you to get the books, read the words, listen to the CD and kill to get a ticket to see Kate Tempest perform. And as for all those awards she is up for – GO GIRL.

There's also this big feature on Kate Tempest in the Guardian a couple of days ago http://www.theguardian.com/music/2014/oct/23/kate-tempest-we-live-in-crazy-times-you-cant-tell-a-story-without-it-feeling-political

I've been pushing round my own thoughts since Saturday night wondering what the appropriate criteria are for appraising this performance which was part of the Manchester Literature Festival.

Good value for a tenner. KT is an accomplished and experienced performer and gave value for money. The standing applause from the mainly white, middle aged and probably middle class audience might presage things to come.

The last time I saw her was with her band at the Tudor House in Wigan maybe four years ago. I'd seen her before at Festivals. She was the real deal, giving 120%.( To be fair the whole band was very good). I thought no-one can keep that up, shades of Janis Joplin.This departure makes sense. Good luck to her.

Judy is right, her clarity is penetrating, but it does expose some of the rapper's need for using two words where one might do. Her short poems did her justice. Clear, simple, universal
stirring emotion in me and a large audience, who obviously had writerly sympathies (not too sure if that's grammatical)and know what it is to seek or find solace in the works of others. She pays her dues.

Had she not been so good I might have cringed at the naivety and didacticism of some of the numbers and her asides to the audience. The world is shit. No the world is awesome. Some people are shit. Most of us are, at some point or another. We are animals not gods.

So KT, you know what is happening to you. It is what most young spoken word performers dream of. You've made it. Well done. You deserve it. But as they say you should be careful what you wish for, it might come true. And please, please , please never turn up on Buzzcocks or any other of those cheesy panel games for wannabees and has beens.

It's very easy to get into binary conversations.

The second statement is of course a false dichotomy.

On the subject of Kate Tempest I do not see her as a poet. I just don't think she sounds poetic in performance and that is confirmed for me in the read. The words feel very ordinary. As far from the perfect words in the perfect order as I could imagine.

But who cares? I mean ultimately...each to their own. We all have our own favourites and that is how it should be. We are free to like and dislike whatever we like - no scared cows.

I hold Andrew Motion, Paul Farley and Simon Armitage in high regard. I hold local performance poets in high regard...some people will dislike these poets, again that's not only right, it is probably how it should be.

The more variety and options we have the better. Also to be fair to Kate Tempest - anything that puts poetry on the map is, arguably only a good thing. The day there is no publicity, let alone hype, that is the day all poets should mourn.

Note: I think Kate Tempest is decent when it comes to a UK variant of Def Jam poetry and a decent musician. Clearly a very good performer. Definitions...I would hazard a guess that our definition of what a poet is or isn't in such cases would revolve around whether you/we class def Jam poetry as being poetry. I think some of it is interesting and enjoyable even. But I don't see it as poetry.

Have a look and see for yourself...

Having read both the article and the comments and knowing absolutely nothing about the young lady in question, I thought I'd take a look at her website for a broader view of her work.

Now I am no fan of performance poetry and even less a fan of rapping.

However, one thing is for certain, she is a born performer and uses words well albeit to my poor old ears, sometimes unintelligibly.

Having sampled all of the video clips available I am left with the overall viewpoint that I consider her to be more of a musician than a poet.

I don't know whether she has some quieter, more reflective (dare I say it) more grown up stuff (why should she, she only looks young anyway) to listen to, but I would like the chance.

And Philip, I don't think luck has anything to do with it.

These days, to get it you have to earn it! (National Lottery excluded).

This piece is wholly appropriate to what Write Out Loud is about: helping narrow the gap between the oft-divided worlds of 'page poetry', on the one hand, and the grassroots open-mic/performance versions on t'other. Or of the perceptions of such a divide.

That's the whole point of Judy's comments: is she a poet, or a rapper, or a “performer”. Kate Tempest can do, does, and has done them all; she is part of - I would argue - a new poetry that speaks to and from the people, bearing in mind the late Adrian Mitchell's comment about most people ignoring most poetry because most poetry ignores most people.

Thank you Judy. Excellent, and very much appreciated.

Thanks for checking out Kate Tempest for us, Judy. Like many others, I've wanted to know more about her for some time. Good to hear that she has a refreshing attitude to all the hype surrounding her, even though it sounds as if most of it is justified! However, as a fellow journalist,I am scandalised at your suggestion that reviewers ever mull over a possible intro before they have actually seen the performance!