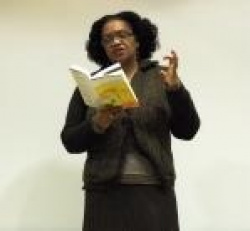 This Poets and Players event was staged as part of Manchester literature festival at the wonderful Halle St Peter’s, one of Manchester best performance spaces. There was such a big turnout, the pre-show coffee bar of choice over the road had to lock its doors.

It was somewhat of a coup to have Kei Miller here – he had just picked up the Forward prize for his 2014 collection, The Cartographer Tries to Map a Way to Zion. Needless to say, the bookstall sold out of his latest work but since he also writes short stories and novels, there was plenty of his offerings available.

He has been amassing awards, honours and degrees for his work for years. He has a soft spot for the city - he did an MA in creative writing at Manchester Metropolitan University - and told the packed and very appreciative audience that it felt like coming home. He also paid tribute to Poets and Players founder, the late Linda Chase.

The charismatic Miller read from his prize-winning collection, which combines tender remembrances of Jamaica with wry humour and warmth. His clarity and diction means his luxuriant language is accessible to all, not just those with the words in front of them. His book records the attempts by a cartographer to map the unmappable and pin down a nation’s geography while ignoring its history, which leads him into a gentle conflict with a Jamaican Rastaman who shows him a different way of seeing and recording.

Among Miller’s many honours, the Institute of Jamaica awarded him the silver Musgrave medal for his contributions to literature, but the sublime Lorna Goodison can trump that with a Musgrave gold Medal among her many honours over 25 years of writing poetry and short stories.

Goodison – who is professor of English and African and Afro-American Studies at the University of Michigan – has lauded Miller’s work for some time. She also has a new collection out with Carcanet  called Oracabessa, but chose mainly to read several poems from her earlier book Guinea Woman.  ‘To Us, All Flowers Are Roses’ tumbles with a lush outpouring of place names from Jamaica.

There is everywhere here.

There is Alps and Lapland and Berlin.

Where freed slaves went to claim

What was left of the Africa within

It echoed one of Miller’s, and almost felt like a reminder to the next generation, that she had written about this subject first – an influence that Miller himself has acknowledged, in this appreciation.

Goodison is a real polymath, interested in everything and everyone. Her paintings adorn the covers of her collections and she writes about other poets, jazz musicians, artists, flowers and her large family, but most of all, she revels in Jamaica.

Contemporary jazz from young Norwich trio Mammal Hands was a perfect foil for an afternoon of terrific poetry. Pianist Nick Smart, drummer Jesse Barrett and saxophonist Jordan Smart cite influences from Steve Reich to North Indian and African music, which was apparent from their fluid but intricate time signatures and rhythms.  I heard shades of Dave Brubeck as well in pieces from their debut album, Animalia.

Lorna Goodison enjoyed it too and was moved to tell us about when she saw Charles Mingus on a New York Street.

◄ Collected poems of Anthony Burgess to be published later this year

You make this sound like something we shall regret missing, Judy; a 'had-to-be-there' event. A coup, too, for Write Out Loud to have you there, reviewing superbly. Thank you.