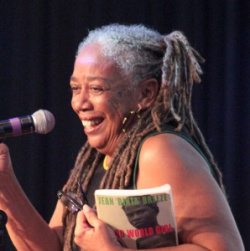 The new Forward prize winner, Kei Miller, looked out at the audience, smiled, and apologised for the downbeat nature of his final poem on National Poetry Day Live at the Southbank Centre in London. His wry humour has a sharp point to it. The poem was about a place in Jamaica called Flogman, from his prize-winning collection, The Cartographer Tries to Map a Way to Zion. In a reference to Jamaica’s slavery past , he said: “Flogging was so common … why not name the whole damn country Flog Island?”

Miller also has a poem about the “self-invited” Goldilocks, looked at from the colonial perspective, and from the point of view of the three bears: “These people had culture … and they’re the savages?” Goldilocks, he said, had “assumed at once her colonial right to porridge”.

Daljit Nagra, who read from his TS Eliot-shortlisted book Ramayana, also offered an interesting view with his ‘Ode to England’, which looks back with apparent nostalgia to the country in the 1970s. Nagra, born in Britain to Punjabi parents, said, with a twinkle in his eye: “White people can’t write this kind of poem any more, or you’ll be accused of being racist. So I’ve written it for you.” The poem remembers the “rag and bone man, on his ancient, blinkered horse,” and says: “Oh England, I’m left to summon your golden age.”

Jean ‘Binta’ Breeze, pictured, referring to National Poetry Day’s theme of ‘Remember,’ said: “So much of what I write is memory.” She had spent 26 years in England, and three years ago went back to Jamaica. She read a long poem about being called as a little girl by her mother to join her in England, and thinking in vain that she had spotted her on the quay on arrival at Southampton; and concluded with a passionate lament for Africa, and its never-ending troubles.

Her poetry - rich, vivid, vibrant, loud – captured a sense of the atmosphere in the Clore Ballroom on Thursday afternoon, at this free event put on by the Southbank Centre and the Poetry Society, and curated by a number of young “poetry producers” aged 18-25.

Hannah Silva also provided moments to marvel at, with her strangely appealing sound poems, including one about Ed Miliband full of fractured barks and yelps. This writer, for instance, had assumed he didn’t like experimental poetry, having heard none. He will now have to think again.

Emily Berry, who won the Forward prize for best first collection last year, maybe misjudged the mood a little when she told the audience that they didn’t have to clap every poem. The thing was, the audience wanted to.

The event was compered by the energetic and clock-watchful Joelle Taylor, and John Hegley, who asked the crowds milling around upstairs to pipe down while he spoke of and paid tribute to Dannie Abse, who died on Sunday at the age of 91. Hegley said he had read with Abse, who was also a doctor, a couple of times: “His poetry was eloquent, truthful, and medicinal – it made you feel better.”

The Southbank’s five-hour event had started at 1pm with the best of children’s poetry from  Joseph Coelho, John Hegley and Gruffalo author Julia Donaldson, aided by children from two primary schools. From 2.30-4.30pm there were poems and performances for young people from Ross Sutherland, Raymond Antrobus, Joshua Idehen, Joelle Taylor, and poetry films from Benjamin Zephaniah, Dizraeli, Marian Allen and Hollie McNish.

It was my third National Poetry Day Live, and I reckon the best one I’ve seen so far. There is a tendency to take for granted these free events for the people at spaces such as the Southbank. We should never do that. Certainly, a day to Remember.