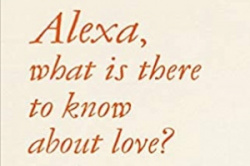 The poet laureate of Twitter, Brian Bilston, is a bit less of a mystery man these days. For a while it’s been known that he is actually Paul Millicheap, a former academic publisher from Oxford, aged 50, married, with children.

But the up-to-date news is that he has a new book of poetry out later this month, Alexa, what is there to know about love?, published by Picador on 21 January. The collection is about love in all its forms, from romantic love to familial love, to long-distance love, and love on the internet.

Described by Ian McMillan as “a laureate for our fractured times”, Bilston/Millicheap remains a little averse to full-frontal publicity. In a recent interview with the i newspaper, he posed for the photographer with his face obscured by a book. Despite his 80,000 followers on Twitter, he maintains in the interview that “I’m still pretty shy, and still mostly unconfident".

His poems often catch the mood of many of his followers. Here’s a recent one, ‘Conservative Party HQ Lunchtime Menu’, with the hashtag #endchildfoodpoverty, which has for starters “Deprived shrimps / Money-glazed smirked ham / Scorn fritters”.

And here’s the title poem from Brian’s new collection

Background: Poetry's man of mystery reveals (nearly all) to Write Out Loud