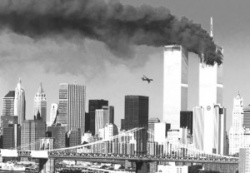 Twin sisters, both alike in majesty,
In New Manhattan, where we set this scene,
From arid lands flocks an old enemy,
To scorch the earth of this, a western dream.

From fateful skies the fatal flights descend,
But none the wiser to their pending fate,
The man and child, to happy affairs tend,
Their future sealed beneath a veil of hate.

Through vacant city clouds, their path annulled,
Two silver eagles level out their wings,
And whilst the terror fills their gravely hulls,
No-one below can hear their deathly screams.

Two flying ships set course and sail together,
To meet their end this day in mid September.

In but a flash the metals mute the sound,
And decimates upon the towers' side;
Below, the thunder footfalls head to ground,
Above, two thousand souls are sealed inside.

The fires roar and billow out their clouds,
Their acrid plumes spread misery and death
And to the cornered guiltless they surround;
They watch them choke and breathe their final breath.

But many did not wish to suffer long
And desperate the man faced with his end,
A single step into the skies beyond
Then to the earth they rapidly descend.

And on the ground, no more was felt the pain,
Oh this, the most macabre September rain.

The panic now most widespread and complete,
As crying eyes stare helplessly above,
To watch the trapped wave hopeless little sheets,
And hear them beg for mercy in His love.

But fire angels cannot reach their goals,
As those two sisters fail against the flames,
For many hero's fall, release their souls
To save their fellow innocents this day.

For even the most steadfast cannot stand
In face of such destruction and despair,
These mighty towers buckle on the land
From flying deathblows dealt them from the air.

And when the crippled giants lost their fight,
September sisters crumbled out of sight.

Simon,
I`d love to see you re-do this as a sonnet.

Wonderful use of the Shakespearean style to
remind us of the horror of that dreadful day.
One of the best things I've read on WOL.
Deserves its place in any anthology.