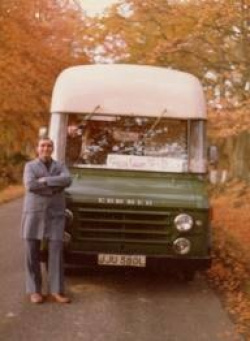 Yes I remember Uncle Ned, a short man stout and round.

Born and bred in Lancashire, where men like him are found.

Though manner bluff and hearty, and accent slow and thick,

His tack sharp mind was canny too, he didn’t miss a trick.

He owned a shop down Ashton way. His main job was to stock it

If any pennies  were found short, they weren`t from Ned`s own pocket!

Out on the road delivering stuff, he oft was heard to say

Them as bides gets no wheer fast. They`re nought but bloody fools!

This owd vans as good as new it`s never ad a bump!

Ah don’t bother wi mirrors at side, they`re no use them t me

Them buggers at the back o me mun all fend for thensen!”

God knows the mayhem that he wrought unwittingly behind.

◄ Under The Stairs

Synchronicity lives! But first I just want to say: I took a look at your titles and Ned appealed. I have worked with a broad Yorkshireman and remember all those quirks. he would say: "Wait while I come with you" or "D'y want owt?" So I found the 'simple' title led to a 'simple' poem and I was well satisfied.
Synchronicity: I had just finished writing a poem in which I used 'scrote'. As I scrolled down to the comment box, the word 'scrote' (Thurmaturgically Charged) jumped out! The Force is strong.

brings back so many good memories of Lancashire for, having emigrated to Yorkshire with litte hope of return, now I hanker after my old accent
I've just discovered your work Cate and am enchanted. You have a style after my own heart and the dialect is a jewel in the crown. ( I have to resort to Albert and the Lion or the Oldham Tinkers for a quick fix these days,

Enjoyed this, Cate. You have captured some old turns of phrase and the accent so well here - reading it you get such a vivid picture of Uncle Ned and how he sounded, although I am sure an audio posting would be good too. X

Such a funny poem and so real ...is that really a photo of Uncle Ned ??xx

Uncle Ned was a tight old scrote who had me grafting a full weekend and generously gave me 25p needless to say I never worked for the old git ever again, Great peom Cate made me laugh ;-) XX

I thought this was really good at the Tudor Cate.

It has a good ole kilter, and is a lovely poetic story.

A testament to a person and a dialect that is probably disappearing as we speak.

I've dedicated a poem to you. Just posted The Wars of the Roses.

Nice one, enjoyed this :)

love it, cate... makes me think of my own family! x

If there's one thing poetry needs it's more dialect poetry! It's something I've loved since childhood. My Nan & Grandad, who were largely responsible for my upbringing, introduced me to it - though the dialect was largely Derbyshire. Later, in my teens, I was a fan of "The Fivepenny Piece" - a folk band from Lancashire who did a lot of dialect monologues etc.

One of my favourites was:

Proper gradely lass, and a fitting tribute to Uncle Ned!

This was a fantastic opener on Thursday - it set the standard bar so high!
I agree with Isobel that you MUST sort out audio to go with it

Thanks folks....Ray I totally agree with you and have changed it as you suggested. Cheers.

Enjoyed it, Cate, I like hearing/reading local dialects. Though I can't make out why you have "pennies short were found" rather than "pennies were found short."

Cate - you absolutely need audio with this - let me sort you out - or let Joe sort you out. Brilliant - so funny.

As I said on the night - I think Uncle Ned passed his driving skills onto me... I have a dreadful track history when it comes to reversing, as you well know!

Really really enjoyed this at the Tudor, Cate, and it's just as good here. Hard to choose between this and Oor Olive's Pumps - you really have got a gift. More please!