The Raising Of The Trickster 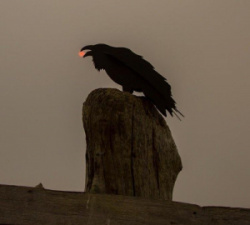 The Raising Of The Trickster

As the lands of Albion darken and strange noises start to crawl from the mist.

At the edge of the fields there sprawls a verdant forest

and there at its very heart sits an ancient gallows tree

where dead men are cut down and buried in unconsecrated ground

This, too, is where the crows first tell of the coming of the walking man

And the prophecy that travels with him of death, rebirth and corruption.

A hushed silence falls across the gathering of witches, sages and gentle folk

And so – they hire the services of a trickster

A raven who will walk with the dark lord

And whisper in his ear promises of redemption

Which themselves will mask the true nature of deception

For if the scarecrow touches the remnants of the fallen

And steals from them their gold and silver adornments

And the spell, cast to enable his cycle of rebirth, will be broken

As the full moon rises above the trees

Their incantations can be heard in the towns and villages

The sound of mother nature weeping and wailing

The sound of new born hope

NEW ALBUM: 'Crow Lore' by THE CROWS OF ALBION ►