THEY DIDN'T KNOW THEY WERE BORN 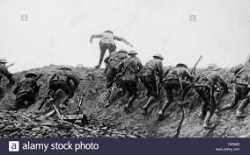 He went but went reluctantly to meet the Bosch head on;

Emerging from the trenches, a Lee Enfield in his hand

To play at “Shoot-my-bollocks-off” across that No Man’s Land.

I also think about my dad who sailed Pacific seas

On Royal and Merchant Navy ships to fight the Japanese,

In fear of planes’ and submarines’ torpedoes, bombs and shells

As Davy Jones’ Locker beckoned underneath the swell.

But neither suffered hardship nor a sacrifice like this -

That students are prevented from a night out on the piss.

◄ THE FASTEST STEAM TRAIN IN THE WORLD

I have nothing but the greatest of respect for those previous generations, MC.
And thanks for the Like, Trevor.

There is a sardonic tone here that would surely have been known
and understood in other days - a way of coping with what they were
experiencing. Is there such a thing as too much freedom? From
some behaviour seen at present it seems a pertinent question!.
Surely, with freedom comes the need for self-discipline...and that's
not a quality we see much of nowadays.

Blimey, Greg! I never knew that’s how it was spelled. But I shan’t change it - I rather like the idea of the old boy fighting a war over white goods.

They always made better dishwashers than we did, those bloody Boche ...

Quite, Stephen. “I’m not wearing a mask because it makes my glasses steam up”. “Try dying, then. See if that’s better”.

😄 excellent John. And yes, some poor souls through this awful pandemic have complained because they've had to go without haircuts & nights out on the piss. Poor buggers

We should be grateful it was those previous generations who stood up when they did and not today’s, Stephen. They were made of better stuff than us.

Well put, John. Wars and pandemics have some similarities, except that in the latter case the chosen few don't quite understand that they are involved.

I don't know if I should be laughing
Or
Crying!

Certainly not laughing till I cry.

I guess I could try reading again and see

I need to get out more I think.