THE FASTEST STEAM TRAIN IN THE WORLD 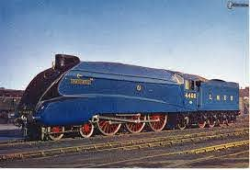 Quite right.  But what is less commonly known is how tenuous is its claim to the title.

Until you consider, that is, that the Mallard record was attained as a top speed on a downhill stretch south of Grantham, whereas the 02’s speed was the average over a measured distance.  More remarkably still, it achieved this hauling 197 tons of freight.

Enlightened opinion is that measured under similar conditions the German engine would have been the faster.

But there was never a subsequent challenge to the new record.  Perhaps the Third Reich was too busy planning that year’s annexation of Czechoslovakia and the fun of Kristallnacht, or the later invasion of Poland.

But no matter.  Tough shits, Fritz.

You snooze, you lose.

THEY DIDN'T KNOW THEY WERE BORN ►

Join the club, Paul.
And thanks for the Like, Dean.

If only you knew how long John! 🤣

You’re welcome, Paul.
Be careful with the CD, though. Make sure you are alone when you listen to it. The baritone delivery a la Richard Burton might otherwise raise long forgotten stirrings in your missus!

Talking of trains…
For a while, I feared that Ronnie Biggs.
Had Robbed the mail train…

“God save politicians God save our friends the pigs.
God save Idi Amin, and God save Ronald Biggs”

Then I remembered, Gawd he’s dead!

Talking of Mallard Don't you think that Ronnie sounded and looked a bit like Arthur?

Oh! Hang on; he was Mullard. Tut!
Going off track a bit… (See what I did there?)

You are right; what a magnum opus it is.

I do think you were a bit hard on yourself when you could not fold it because, in your words, you were too thick.

Oh! Hang on, the words, some of the words were thick.

Which btw, is a well-produced and put together publication.

PS
I don’t think I’ll need any more copies as I’ve had the scanner and copier on since 08:30 this morning, just got to nick some staples out of the other half’s drawers, (NO lewd comments Mr C.)

Thank you so much for thinking of me.
Paul.

MC - When you read Andrew Marr’s “History of Modern Britain” you realise how close we were in 1940 to “doing a deal” ie surrendering. Of an inner war cabinet of 5, Chamberlain and Halifax were in favour, Churchill. Attlee and Greenwood against.

An interesting look back at steam loco history. The Brits and Fritz
have always been closely aligned in the brilliance of their inventions,
especially those that "go anywhere"! No wonder der Fuhrer was
not so keen on attacking the UK when there was a possibility of a
deal in his mind. Just sink of ze might of der duo ven vurking as vun!
Ve vud haf bin der rulers, nicht problemz - Brits and Fritz. Achtung
alles in ordnung...(then Adolf wakes up).

I have had few run-ins with the BTP in more recent years.

Ah, yes. Platform tickets. I think they were time-bound, probably 1 Hour. More adventurous was sneaking round the sheds to “cab” a few. Got chased by the railway bobbies a few times.

Did you have to pay a penny to get on the platform?

We did at Norwich. I told them my mum worked there cleaning the trains during the war for them... still had to pay.

Ssshhh, Brian. You’ll have in front of the modulators again.
It’s a thought, Stephen. Perhaps she saw the Dwight D Eisenhower whistle by once and thought “I’m having one of those named after me.
I was indeed an anorak, Paul. Those were the days when you could hop on a train to London as an 11-year old to do some spotting with a couple of mates . Times have changed.

Crumbs so many anoraks here, who knew.

Grantham. Think about it, maybe Margaret Thatcher was a trainspotter and recorded the Mallard's number as it went past. I think we should be told......

I vould like to mek ze objection to ze anti-Deutsch sentiment in zis poem.