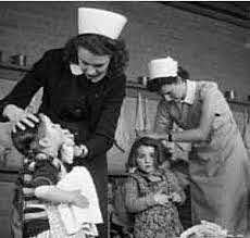 As a 50’s Baby Boomer I was an early beneficiary of the newly created Welfare State.

Certainly the country was still in the arms of post-war austerity and as a whelp I caught the tail-end of rationing and will have gobbled down my fair share of powdered eggs and Ostermilk.

But of the many upsides were the provisions of the 1944 Education Act which cradled me through infant, junior and secondary schooling to university.

On the periphery of its mainstream benefits and in conjunction with the likewise newly formed NHS was the school nit nurse.  “Nitty Nora” would visit the school periodically to rummage round our heads.  To be found to be lousy was a matter of shame and pompous parents would blame its spread to their little darlings on the scuzzie kids. I was one of the scuzzie kids.

Looking back I wonder what extensive medical training a nit nurse would have had to have undergone to become qualified in her field.  Surely not the rigorous and long-term education of, say, a G.P. or a dentist?

Likewise I now wonder what motivated mature women to join the ranks of school nurses whose sole function seemed to be checking the retraction of the foreskins and cupping the balls of adolescent boys.  It makes you wonder, doesn’t it?

One of my early memories focuses on the time my colour blindness was diagnosed.  I’d have been about seven, I guess.  Parents were invited to sit in on these examinations and my dad had taken a day off work to be with me.

As you will know, colour blindness tests comprise a series of coloured dotted circles in which a preponderance of specific coloured dots traces a number – 17 or 53, for example.  Some are unnumbered and serve as controls.  I worked my way through these calling out the numbers or telling the doc that they were blank. On one blank my dad nudged me and gave me a look as though as to say, “Go on then. Tell him!”

At the end of the test the doctor explained that I was colour deficient to red and green, something which affects a surprisingly high minority of men  “Thank God for that” said my dad.  “I was going to belt you when we got home for being stupid”.

He was more impressed some years later when I told him my reaction to the nob nurse.

◄ THEY DIDN'T KNOW THEY WERE BORN

HE'S A LIABILITY - GET HIM OUT OF HERE ►

Thanks for your comment, Kev, and for the Likes, Stephen A and Stephen G and Anmolpreet.

I can remember taking one of my lads to the hospital with a rash at the top of his thigh. He'd have been about 7 or 8 at the time.The doctor tried to access it by pulling his shorts up.
He said you'll have to pull em down, it's right at the top.
She said. I was trying to save your embarrassment
He said. You'll be embarrassed when you see what I'm packing.

I thought.. that's my boy

I think I would have guessed that you would only be able to score 2 out of 3, Julie.
And thanks for the Like, Hope.

Well.... I remember the nit nurse and the dotty colours😀

MC and Paul - In truth, the actions of the nob nurse were as unerotic as was possible. So much so that The Little Corporal invariably shrank in fear to the size of an acorn.

I told her "The future of Britain lays in your hands"

God help us! her reply.

My word - how you johnnie-come-lately types (no reference in the above context inferred!) were spoiled by all that attention. We war
babies never had it so good! All those trips to the village shop with
our ration books during our kid years, with stern parents/step-parents
from an Edwardian era keeping us in check. No ball cupping for us by
matronly strangers. You never had it so good!!!!
Or - as Private Eye misquoted Harold MacMillan: You never had it? So good!