Competition closes in 15 days, 2 hours. Get details and Enter. 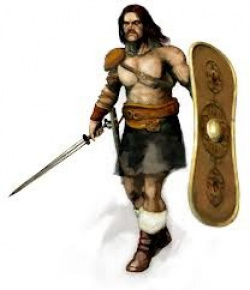 (A re-post from 2013.  Prompted by a line from the Edward Rutherfurd novel "London" and set in the Bronze Age)

“For these” said the father, “are the things a boy should know.

The gut for its twine, the yew for the bow

The paths through the woods where the spirits go

To gauge with the eye through their hips and breasts

The choice of a wifeman where the seed will sow

The laws of the hearth – of meat for the guests

That the child be clothed e’er the man be dressed

Where to trap the fish when the river’s low

The tracks of the beasts they leave in the snow

To call to each other in the woods like the crow

The tribute owed each god by whom we are blessed

Respect for the Elders whenever he’s addressed

To aim with the spear for the throat not the chest

The oaths of the ancestors forged long ago

To bind the tribe to fealty or sworn eternal foe

In friendship or blood the debts that we owe

Offend not your father nor question his behest

Leave grinning to the girls, for men are not impressed

The Trial of The Hunt – the warrior’s test

The use of the shield, the axe and its throw

For these” said the father, “are the things a man will know”

◄ SITTING NEXT DOOR TO BORIS

Thanks for the “likes”, Kev and David.
Political correctness is a fashion like platform soles and kipper ties. We do well to remember that the sentiments here would have been at the PC cutting edge 3000 years ago.

It was a sentence, MC, which, as I read it, I thought “It has a certain rhythm. I could make a poem out of that.”
(And I think I was born out of my time).

I can imagine these lines being used as the preface to a novel of
the long-ago.. Like a curtain drawn back that dispels the mists of
time and reveals a world gone by.