SITTING NEXT DOOR TO BORIS 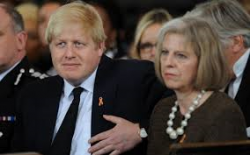 (A re-post from a couple of years ago. But how fashions come round again! It was prompted by the joker who approached Theresa May at the rostrum of the Tory Party Conference to give her a P45, claiming Boris had sent her.  How Boris must "love it when a plan comes together"!)

Cammie called George when he got the word

He said “ I suppose you’ve heard about Boris?”

George rushed to the telly, put the news on live

He could hardly believe his eyes

There was Treeza with her P45

They weren’t playground friends from the same posh school

They weren’t teenage sweethearts love made into fools

But for several years she’s been sitting next door to Boris.

She took him for a rogue and a lovable fool

A slow-swimming sperm from a small gene pool

For all the time she’d been sitting next door to Boris.

But no, he’s not a bumbler and nor was he thick

His tomfool buffoonery was all a clever trick

The clue was always there in his Oxford degree

A scholar of Classics and of History

He could quote Aristotle and Virgil and from Horace

Cos she thought his appointment would be his poisoned chalice

She shared his vision of a One Nation state

She thought their fortunes were entwined by Fate

She never saw his hate while she was sitting next door to Boris.

But planned for her sack while she was sitting next door to Boris.

◄ A WOMAN'S RIGHT TO CHOOSE

Stanzas! And with rhyme! Now that's what I call poetry. ....