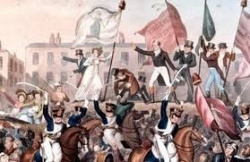 Manchester poets will be reading poems on the theme of Peterloo at Manchester Central Library on Tuesday 6 August at 6-7.30pm – one of a number of poetry events to mark the historic moment’s 200th anniversary. The library is in St Peter’s Square; the area around the square was the site of the Peterloo Massacre in 1819, when cavalry charged into a crowd of up to 80,000 people who had gathered to call for parliamentary voting reform.

Tuesday’s Peterloo Poems by Manchester People reading is organised by Manchester Histories and Stockport-based Seven Arches Publishing, which is also running a Peterloo-related poetry competition. Its closing date is the 200th anniversary of Peterloo  - 16 August 2019.

Other events taking place to mark Peterloo include a reading by actor and honorary professor of literature and performance Maxine Peake of Shelley’s poem ‘The Masque of Anarchy’. Written in the aftermath of Peterloo, it was repressed until after his death. The event at John Rylands Library in Manchester on Monday 12 August is sold out, but it will be livestreamed on the library’s Facebook page from 6pm.

Shelley’s poem will also be read at Keats House in London on the day of the anniversary, with Professor Ian Haywood of the University of Roehampton discusssing its historic context.

Let's hear it as spoken word reclaims the stage: poet launches book on its rebirth ►

Its frankly quite a shocking story this one which started my interest in this topic years ago. Look forward to sharing my poem at Manchester Central Library tonight.

I was interested to read the report in the latest online edition of the
West End Extra newspaper (for central London) about a certain
Tom Foot recalling his father Paul Foot...and highlighting Shelley's
lines. Watching the television images of the Russian police at work
with their batons challenging and arresting hundreds of political
protesters, it occurred to me that if they had been given swords
instead and the authority to use them, then history could well have repeated itself, even today. When a nervous type of government
feels under threat it will react - in certain instances with deadly
force, as has been seen more than once beyond these shores in
recent times.