Let's hear it as spoken word reclaims the stage: poet launches book on its rebirth 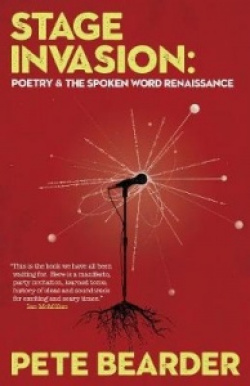 Spoken word is no longer “underground” or “emerging” … if you look at the sweep of history and poetry’s oral tradition , it’s page/written poetry that is the aberration … Kate Tempest draws a bigger audience than the poet laureate … spoken word can help to heal society in a time of collapse.

These were just some of the fascinating claims and assertions made by poet and author Pete Bearder, aka Pete the Temp, at the launch of his scholarly yet very accessible book, Stage Invasion: Poetry & the Spoken Word Renaissance (Out-Spoken Press) in London’s King’s Cross this week.

Pete Bearder is a spoken word poet, comic and musician, and former national poetry slam champion who subsidises his writing by working as a street entertainer in the summer. He was Glastonbury festival’s poet in residence a few years ago, and knows his stuff.

On that first page of the introduction to his book he argues that “the UK is experiencing a sea change in the way poetry is produced and consumed.  As a democratic literary movement, spoken word is redefining the role of the poet in society. Poetry is happening in a proliferating disaspora of settings where this ‘private art’ can be found, surrounded by ordinary people – and large numbers of them – shuddering with tears, laughter, and clenched fists.”

He gives one example - of many - of how spoken word can now be considered mainstream: “In May 2017, Mancunian spoken word artist Tony ‘Longfella’ Walsh summoned tears to hundreds of thousands in a poem he performed at the Manchester bombing memorial service. The poem trended fourth in the world on Twitter.” 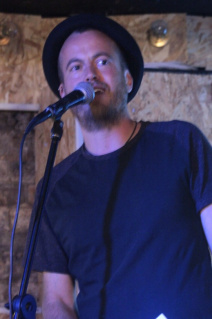 At the launch Bearder, pictured left, offered a brief history of the oral tradition, arguing that oral poetry in societies often had more, complex rules than the later written form. In the last 200 years oral poetry had been important in the Chartist protest movement, the anti-fascist Popular Front of the 1930s, the Beat movement and poetry of the 1960s, when 7,000 had attended an event fronted by Allen Ginsberg at the Albert Hall, the Liverpool Poets, punk poetry of the 70s and 80s, when poets ventured to the mic between bands, dub poetry, and hip-hop.

Early in the launch he encouraged the audience to shout and wave their arms in call-and-response mode to illustrate his point that what he called “ecstatic poetry”, including cheering, whooping and stamping of feet, was a perfectly “valid poetic activity”. In this context he pointed to the “syncopated, ricocheting rhymes” of a poet such as Kate Tempest.

He is a big fan of slam poetry, and the book takes a closer look at slam “in an attempt to understand why it has become such a popular and divisive force in literature”.  He discusses what the term “spoken word poetry” actually means. Chapter headings include A Brief History of Democratic Literary Movements; The DIY Renewal of Poetry; The Path of the Poem Through the Body; The Contract of ‘Emotional Participation and the Rhythms of Audience and Affect; Reviving the Ecstatic:  Live Poetry, Transcendence, and Altered States of Consciousness; and Poetry, Protest and Political Renewal.

In his conclusion Pete Bearder asks: “Can the spirit of inclusion live alongside a growing desire to raise standards? Can spoken word be on TV adverts and still be countercultural?” Among his final words are these, somewhat apocalyptic ones: “The coalescing tidal waves of social, political, and ecological collapse are bearing down on us. I believe spoken word can help. For a social movement to grow, it needs new – and preferably young – people … Ideally the movement should offer the opportunity for them to express themselves, sing, dance, laugh, and make noise. Spoken word lives comfortably alongside all of these activities.”

The book also mentions the attempted demolition job on the reputations of spoken word poets Hollie McNish and Kate Tempest by the poet Rebecca Watts in the magazine PN Review last year . 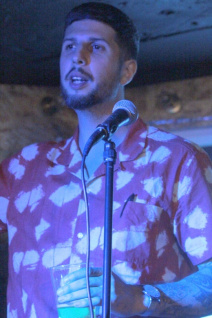 In a Q&A session at the launch there was discussion of the term “spoken word” as a label, and not necessarily a complimentary one. Out-Spoken Press publisher and poet Anthony Anaxagorou, pictured right, said he preferred to think of himself as just a poet these days, rather than a “spoken word” one: “I realised that ‘spoken word’ made me regarded as less of a poet.” Pete Bearder said that the term could also be used to pigeonhole poets of colour. On the other hand, a process of assimilation was going on, with a succession of spoken word poets winning the Ted Hughes award … Kate Tempest, Hollie McNish, and Jay Bernard. Anthony Anaxagorou said: “It’s important that we don’t get boxed in with labels. A poet like Jo Bell makes a Nationwide commercial … and yet her book is also amazing.”

As publisher, Anaxagorou said of the book: “I felt this was the kind of thing that poetry needed. It’s a primer … there’s never been anything like this that’s hit the poetry landscape.”

In his introduction to the book Pete Bearder says that Stage Invasion builds on the research he did for the writer/teacher masters programme at Goldsmiths College, University of London, and he also pays tribute to others’ work and help in this field. There are copious references at the end of each chapter, and at the end of the book. This article is more a review of the launch, rather than of the book, but I hope I have conveyed a flavour of it. One thing that Pete Bearder said in the basement at the Star of Kings pub – a simple thing - struck a chord with me. It was this: “All across the land, these regular spoken word nights are incredibly important.”

I run one such open-mic night with another older bloke, in the café of an art gallery in Woking. Each month new poets turn up to read, having Googled us, and they are invariably young. Their style of poetry is “spoken word” – and month by month the balance of our night is changing, from a dominant “page poetry”, to an equality with newer forms. Or maybe older ones … Where will it end? I know this; it does my heart good to see it.

Poetry, read or spoken, can be said to be composed of complementary forms. The page is indispensable for varied
reasons yet the enjoyment to be had from listening to a fine vocal
rendering of poetry (a Burton, a Gielgud - to mention just a couple)
that is available via the medium of recordings can be profound.
I have some old LPs of poetry - one of the late James Mason reading
"A Shropshire lad" - and the experience of hearing the words come
alive in those famous tones never palls. The current open-mic
system seems to attract new talent and that has to be a good thing.
Long may it prosper.

Yes Greg other than two entertaining evenings in the company of Pam Ayers and Roger McGough. Doesn’t stop me from making a comment surely? The point I was trying to make was that there have been many previous peaks involving the spoken work.

I’m only capable of ranting on a page!

"Claiming that spoken word is at an all time high is, to my thinking, over-egging the sales pitch a little too far!" Is this the same Graham Sherwood who has said in the past that he has never attended an open-mic poetry night?!

"to illustrate his point that what he called “ecstatic poetry”, including cheering, whooping and stamping of feet, was a perfectly “valid poetic activity”

For a social movement to grow, it needs new – and preferably young – people … Ideally the movement should offer the opportunity for them to express themselves, sing, dance, laugh, and make noise. Spoken word lives comfortable alongside all of these activities.”

I know he needs to sell as book! Fair do's but claiming that spoken word is at an all time high is, to my thinking, over-egging the sales pitch a little too far!

Our newcomers tend to be younger, Dom, yes. But we value all ages, of course - and we have a good mix. Our age range was older when you came to read to us at Send a couple of years ago - it began to change after we moved to the Lightbox art gallery in Woking. But come and read with us again, and see what you think. That applies to others on Write Out Loud, too!

Is it really the invariably young turning up at Woking, Greg? To my mind poetry has always been a come all ye, and I'm not put out in the least if the considered, written word can be trumped by a flash of inspiration. All the same, it's good verse, bad verse or chaos.
As the Nobel Laureate puts it:
Get sick get well hang around the ink well.