'Help each other, and we all get up the ladder': Jo Bell goes Nationwide in latest poetic TV ad 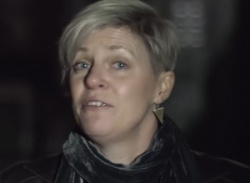 The former canal laureate Jo Bell has joined the growing corps of poets recruited for TV adverts by Nationwide building society. Jo’s poem about how the Nationwide building society began, and why, was broadcast on Saturday night during ITV’s The Voice.  It begins by setting the scene in 1884: “the foundries churn out change, there’s more smoke than air”. It goes on: “Help each other, and we all get up the ladder … we all get a vote, we’re in the same boat.” And it concludes: “The currency of kindness nationwide.”

In her Bell Jar blog Jo explained how she got involved with the Nationwide TV ads campaign featuring poetry and spoken word, which began last autumn with Hollie McNish, Matt Abbott, and Sugar J Poet, and has since involved numerous other poets, delivering full poems or just a couple of lines: “Sometimes when I’m commissioned to write a poem, it’s a mixed blessing. Poetry isn’t copywriting; if you can’t believe in the thing you’re writing about, it will sound fake … But this was different. When the Nationwide asked me to join their new advertising campaign, I expected the usual patter – ‘We are passionate about financial products’ etc. Instead, I found myself talking to people who really believe in the company. How interesting, I thought.”

Jo and a number of other poets who have featured in the VoicesNationwide ads campaign were at the Nationwide’s conference at Birmingham’s NEC last week with the Poetry Takeaway, which assembles poets to write poems for individuals within a short time and at short notice at events up and down the country. The Poetry Takeaway has been involved in helping to line up poets for the Nationwide TV ads campaign.

◄ Dudley's Grande Slam gets off to a flying start

Love, poetry and the whole damn thing: Write Out Loud at Wigan tonight ►