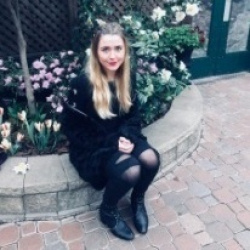 The new Write Out Loud Poem of the Week is ‘My Point is Circular’ by Alexandra Parapadakis. The last line of her poem says: “Ask me what I mean!” So we did. Alexandra said that the poem “tries to comment on the paranoia and guilt that rape culture and victim blaming can cause its victims”, and does this in an “inner conversation that the speaking is having with herself”. She has recently graduated from the University of East Anglia with a degree in American literature and creative writing. On her Write Out Loud profile she reveals that she is dyslexic, and adds: “The best part about writing poetry now is when I know that my message has been received by someone else.” She also says: “As a young child, I was late to speak, read, and write - and when I did write the letters were the wrong way around, the words were mispelled, and the handwriting was abysmal. My dad even rewrote a little diary entry I made about my newly born brother for fear that nobody would understand the original in the future … I also had a speech impediment so my older sister had to translate my monologues to my parents. But whether I was being understood or not, I had a vast imagination and a lot to say. I still do.”

Can you tell us a bit more about the background to your winning poem?

This poem attempts to capture an inner conversation that the speaker is having with herself. In trying to understand what someone has done to her she rambles and ties herself in knots. In today’s culture we try to label and define attacks, which creates this hierarchy of what kind of assault is worse or what might qualify as bad enough to be reported and elicit legal consequence. My poem tries to comment on the paranoia and guilt that rape culture and victim blaming can cause its victims. Hence, the speaker imagines what her perpetrator might say or write, and how this story might be favoured. Unfortunately, sexual assault within society is cyclical, rape culture allows for it to go on and on. In the same sense, the speaker finds herself going in circles when trying to rationalise what has happened to her.

Which poets are your biggest influences? Have you discovered any new ones since you were last interviewed by Write Out Loud, in 2016?

I still enjoy Browning and other literary giants, such as Sylvia Plath, Emily Dickinson, Elizabeth Bishop, and Allen Ginsberg. But I have discovered new influences since 2016, some being: Harryette Mullen and Ofelia Zepeda. I also watch a lot of slam poetry on YouTube and never cease to be amazed by the passionate voices and extremely valid messages. Crystal Valentine, Lily Myers, and Katie Makkai are a few of my favourites.

You also said back then that you had not performed your poetry much live. Is that still the case?

Unfortunately, I am still not much of a performer. I prefer to write and I often attend open mic nights to watch. However, I perform every now and again at walk-in venues. I finished my degree at the University of East Anglia a few weeks ago, so I will try to make more of a habit out of performing this year - now that I am back home.

Do you think your poetic style is still evolving? Has the subject matter changed?

I am still inspired by social politics regarding inclusive feminism, family, relationships, LGBTQI+, class, race, disability and gender. As an egalitarian, I think these topics will always remain close to my heart. I am passionate about them, but they also interest me, so they continue to influence my writing (whether this is through poetry, prose or essay form).

My poetic style is still evolving. My poems have become much more “free verse” than they originally were. However, when I first stopped writing according to rhyme schemes, I almost completely abandoned rhyme. Recently, I have returned to rhyme and rhythm, but I use it flexibly and according to the voice or purpose of the poem, which might appear sporadic when compared to regimented rhyme schemes. I’ve learned to adapt the structure of my poems based on their content; I enjoy for my form and content to be reflective of one another. I’ve also realised the power of sound outside of rhyme and rhythm. For instance, employing homophones, heteronyms, plosives, fricatives and alliteration can sound satisfying, create puns, and imply new meanings within the poem.

MY POINT IS CIRCULAR

My mouth took some months to bloom

My words took some weeks to flower

You and I do not speak different languages

“What is the curl of your tongue?

What is the grind of your teeth?

What is the bow in your brows?

What do you mean?”

Your bottom line is neat and fine

My point is a right wrong angle

My point is obtuse, round, circular?

My purpose is personal

Decoded differently by all

Is that what I mean?

Yours has finished writing

Or maybe it never needed to begin

My claim is paper thin

With a sharpened pencil you can break its skin

What did you mean?

What did you mean?

Did you mean it?

I have twisted my argument into a poem

And someone else has into a haiku, crossword, word search…

I have mixed and muddled the letters of the ABC

If you jumble them long enough they go away

What was I saying?

We all speak the same language

What you did was not okay

But we possess different meanings

You say: “All I’m guilty of is horseplay”

And why is it ‘play’ anyway?

It goes on and on

Now, what do I mean by that?

Ask me what I mean!

I appreciate the measured tension I've found in much of your writing--it's a raw yet elegant quality that makes blunt force unnecessary.

I hope that makes sense, Alexandra.

It's good to see your writing recognized here,

Thank you for all these thoughtful comments, I really appreciate the support!

Taken at any point, excellent. With that thought at its own speed or pace quality which is so arresting and a lovely, orderly muddle. POTW you bet.

Great choice for poem of the week here. Really powerful. Agree with martin E here but it stands up on page just as well i think

It's good to see you voted POTW for the second time Alexandra. Interesting to read your bio/answers too. I have a young granddaughter who has similar issues that you describe with both speech and writing but she also has your spirit too!
Good to know that you have graduated and are now perhaps freer to compose more compelling poetry.

Incredible! Congratulations for a magnificent piece Alexandra!
Thank you ?
Mae

I am not in the least surprised that this poem has become POTW. It is an excellent use of words. because of its natural rhythm and pace I can imagine it being read or recited in a live situation.