Competition closes in 25 days, 22 hours. Get details and Enter. 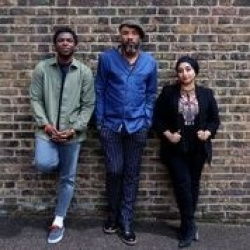 Hafsah Aneela Bashir, Anthony Joseph and Yomi Sode have been chosen as Jerwood Compton Poetry Fellows for 2019-20. Each poet receives £15,000, and is given a year of critical support and mentoring aimed at allowing time and space to focus on their craft, with no expectation that they produce a particular work or outcome.

Hafsah Aneela Bashir is a poet, playwright and performer based in Manchester, who published her first collection last year. Her work blends narrative, free verse and lyric poetry, exploring relationships between the private, public and political. Her lyrical activism reflects a strong desire to effect social change, drawing on spoken word and her mother tongue of Urdu. During her fellowship year she wants to explore film, the relationships between imagery and text and different platforms in which her poetry can be transmitted.

Anthony Joseph is a poet, novelist and musician who lives in London. His work straddles the rhythms of Caribbean creole and the experimental aesthetics of surrealism, jazz and language poetry, while challenging notions of form and identity. He wishes to extend his experimental poetry through the medium of film.

Yomi Sode, a poet and playwright based in London, plays an active role in the spoken word scene, and is founder of the BoxedIn night in Shoreditch. His poetry is as much narrative and dramatic as it is lyric; he aims to use this year to refine his poetry, having spent the last few years immersed in his theatre work.