LEADER OF THE PACK 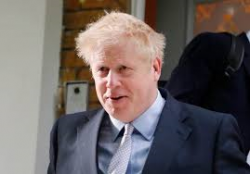 Isn’t that Boris there over there in the spotlight?  (Uh uh)

By the way, where’d you meet him

“I saw him on the telly with unruly hair

I thought him a cutie and a cuddly bear

I never saw him as Leader of the Pack".

You folks were always putting him down

(You always said that he was just a harmless clown)

You said that he was mad

A rotten cad but barking mad

He’d never make it to Leader of the Pack.

You said he was a daft bumbling fool

Whose brains he kept inside of his tool

He cheated on his wife

And shafted colleagues all his life

He’ll never make it to Leader of the Pack.

But then he found convenient cause

By backing Leave in the Brexit Wars

But found willing donkeys in gullible you

And jockeyed position for Leader of the Pack.

He used the plebiscite

Become the darling of the blue-rinsed Right

He waited in the wings till one day

The sticky stuff had stuffed Mrs May

So now you’ve got what you deserved

More bodies round him than Game of Thrones

And now he’s shafted you, by Jove

You’ve helped him to make it as Leader of the Pack.

Thanks, MC. I haven't read his biography of Churchill but a friend of mine who has reckoned Boris learned his gimmicks from Churchill - something the public could identify with and warm to. Churchill, his cigar and V sign; Johnson his hair and bumblingness. In Johnson's case entirely derivative and contrived.

JC - have you read BJ's biography of Churchill? He would deny it,
no doubt, but it might give an insight into his own mercurial character
and use of caustic wit - like WSC's response to Bessie Braddock's
accusation that he was drunk - "And you, madam, are ugly but I will
be sober in the morning". The snowflakes of today would be crying
"prejudice" if faced with that sort of thing in modern public life. But
even the "warmonger" WSC wouldn't have contemplated encouraging physical attacks on those he disagreed with.in
political scenarios.
P.S. Shafted Michael Gove? History
seems to report the opposite.

You're so right, Eve.
You can't blame Boris for being a self-serving, lying, cheating tow-rag. It's what he is. You can blame the British public for not caring.

and there we all were looking on speechless in shock when the USA elected Trump......just goes to show there seems to be no end to the insanity in our world!

Whoa! Thanks, Brian and Don. I think our posts crossed in the ether.

Many thanks, Greg and Kev.
Most political targets are so partisan that some supporters think it unfair to have a go. Boris is one of those rare political targets that taking a pop at offends non-one. Donald Trump is another.
You’re right about the ending, though, Greg. In the original (or was it Twinkle’s “Terry”), the motorbike skid seems to last about half a minute. He must have been travelling at the speed of light!
Congratulations on POTW, Kev. Just a shame non-one gets the pleasure of hearing you read them too.

Leading pack, will give you fun
Brighten up politic gloom
Whose to say what will come forth
Here comes Boris, for all it's worth

Spoken by a knowledgeable poet from a great distance...?

Would have worked better if you had got your Gert to do backing Vocals,
Hope you had a nice holiday

Disappointing ending, John. In the original song the Leader of the Pack expires. That would have been a better finale. But I suppose, following the Jo Brand precedent, you thought it best to avoid that ...