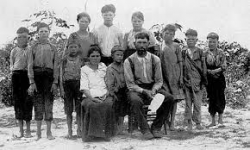 (A true story told to me by Wilf, cut down a bit as she's got more rattle than a can of marbles).

The tribe had gone from Barnsley to America for a fortnight’s holiday – grown-ups, kids, grandparents aunties and uncles.  After arriving at JFK Airport they went off in search of the bus they’d hired.  It was big enough to take them all and was the sort that had a sliding side door as well as ones at the front and back.

Unfortunately (we’ll find out for who shortly) it didn’t work properly, which meant some of the tribe would have to clamber over the seats in the front or the back to get to their middle rows.

The Bandits went back into the office to complain.

The youngster looked around to his colleagues for assistance but they had all simultaneously discovered huge enthusiasm in their paperwork.

The rest of his party divided equally among those who stared blankly like extras from Deliverance and those who had travelled beyond the environs of Barnsley to the wider cosmopolitan worlds of Donny and Huddersfield.  These were kinked double in tears of laughter.

Jud looked around at them to see what was the matter.

Meanwhile, the lad had managed to translate some of the complaint.

He clearly hadn’t worked out yet what the ‘doowa’ was.

◄ I MISS THE MAN THAT I USED TO BE

LEADER OF THE PACK ►

Many thanks, Kim and MC. They really do speak in tongues in Barnsley. Folks in Doncaster 12 miles away can’t understand a word they say.

Ha...many a true word (or something!). I took my mother on a visit to
see her eldest daughter who had married a WW2 vet. from Louisiana
and during the course of our first enlarged family meal together I was
met by frowns of puzzlement from some younger members of the
Stateside family and was somewhat disconcerted when they complained to their mother that they couldn't understand what I was
saying. Me?..who had conversed with many Yank tourists seeking directions ("how many blocks to Regent?" etc) on Oxford Street W1.
But I quickly realised that a deep Southern drawl was unlikely to
pick up on "received English" too quickly - and things improved
when I adjusted my words and speech pattern accordingly.

This is an excellent piece of fun . So glad you recorded your wonderful voice performing it. Love, love, love the accent!

Thank you for brightening my day ?