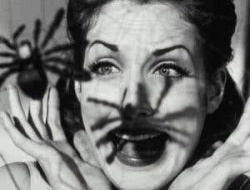 This weeks Poem of the Week is 'Scared of Spiders' by KJ Walker a beautifully rhythmic reminder that although he can 'cracks walnuts with his eyelids' and has 'got muscles in places I ain’t got places' there is still something small and innocuous that can make his blood curdle.

Those little eight legged friends of ours are able to elicit screams like no other creature and KJ's poem is an ode to both the terror we feel and the faint ridiculousness of it all.

After all, they are only tiny...

Below KJ answers our Q&A

I've never considered myself to be a writer. I left school with little education, and no qualifications. When my children were growing up, I was always telling them stories of my own childhood. My kids treated these stories like fantasies, as they were so different from their own experiences. My oldest son encouraged me to write these stories down, and so I began my first novel. It was an ambitious project, doomed to failure, but iI did manage to write 28 of an intended 36 chapters.

During a break from my novel ( a long break because I abandoned it) I had a bash at writing a poem, and was hooked.

I can tell you the exact date that I wrote my first poem, because I published it immediatly to the site I used to publish chapters of my unfinished novel. It was  December the 4th 2016 (I bet not many have given that accurate an answer)

I attend an open-mic in Doncaster. Well Spoken, at the Doncaster Brewery & Tap. We meet on the second Thursday of each month. I've been going since Feb 2017, which in retrospect was quite brave as I'd only been writing poems fo a couple of months at that time. It's a brilliant night, and everyone is very encouraging. If anyone nearby is thinking of giving it a go, this is a good place to cut your teeth.

Whenever I'm asked about my favourite poet I give a different answer. People compare me to Marriott Edgar, because I tend to write long monologues. But as a kid I listened to a lot of Mike Harding. I think that his stand out poem was Grandad Ackroyd's Funeral.

The last time I was asked about my luxury item I said a bottle of whisky, then I regretted saying that because it sounded flippant. but if I'm being honest, I'd have to stick with my original answer.

He cracks walnuts with his eyelids

Bends girders with his ears

He’s the man who can fight twenty men

Plus their saddles, and their riders

He ain’t afeared of any man

But still he’s scared of spiders

He’s got a tattoo of a dragon

To show how tough he is

He’s got muscles in places I ain’t got places

He’s got muscles in his piss

He’s feared by his inner circle

He brings dread and alarm to outsiders

He ain’t afeared of any man

But still he’s scared of spiders

Ghosts and spectres can’t get to him

He’s no fear of the unknown

Bring on a hoard of zombies

He’ll take ‘em on his own

Would fall foul to his martial-arts skills

But show him a little spider

And he’ll go running for the hills

'Each to his task in the quiet of the long familiar' ►

Thanks Dorothy, I'll make sure I look up Fred next time I'm in Grimstone Low. Everyone in the village knows the Floppits, and everyone has a story about their drunken stupidity.

Thanks John. You were missed at Well Spoken, though we had a near record number of readers. Unfortunately Miller Place couldn't make it so Ian Parks stood in as guest poet.

I'm hosting the next but one Well Spoken (August) I especially hope you can make that one, as I need all the help I can get.

Only just seen this, Kev as we've been away on holiwags. Well deserved. But no more so than any of your fabulous tales we get treated to at Well Spoken. Newcomers to his stuff should check his page out.
But where's the audio????

i love your work - so glad you are PoTW - congratulations.
Dorothy

Thanks Keith and Ray. As ever your comments are much appreciated.
Cheers Kevin

A good read to stretch the imagination and the tingles Kevin. A crowd puller I'm sure. I like the muscular style that seems to work so well for you !

Thanks John, Martin, M.C, Jon and Trevor.
I personally have no fear of spiders, but when I have to pick up a particularly big hairy one I have to think twice about it. As M.C said there's "something of the night about them"

The disparity between physical and mental strengths is well caught
in these entertaining lines. No doubt the fear (respect?) that spiders
instill in us has its roots in the DNA of self-preservation. These
creatures have something of the night about them, emerging with
an unnerving rapidity, often with a venomous weapon in their armoury that can prove fatal to humans - and still does in many
parts of the world. Fortunately, in our temperate UK climate, our
species are more benign - except for the occasional import that
can appear and cause the age-old alarm bells to ring.

It is strange the things we mere mortals are afraid of. I must admit I am not sure that I would be too keen on a Tarantula.
A thoroughly entertaining poem
Congratulations on being POTW K.J.

Liked this kj. Trips along like a likkle spidery running up your arm. Alarmy me army!! Well-penned. John