'The Queen takes a big interest ... we have a lovely day at Windsor castle' 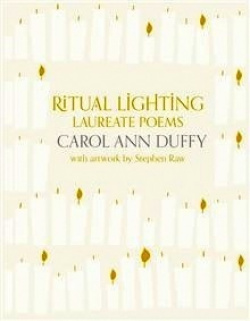 A poet laureate is rarely out of the news. Write Out Loud looks back at some highlights from Carol Ann Duffy’s tenure:

2011: The poet laureate responded to the royal wedding of Prince William and Kate Middleton with a poem called ‘Rings’ that did not mention the couple at all. ‘Rings’ appeared as part of an anthology of 22 poems she commissioned from poets across Britain in celebration of weddings and civil partnerships in all their forms.

2012: Her collection, The Bees, won the Costa poetry award

2012: Carol Ann Duffy came under fire for her poem written in the aftermath of the conviction of two men for the 1993 racist murder of Stephen Lawrence. The criticism raised the issue of what poet laureates should write about. Should they stick to commenting on royal occasions – or, like Duffy, find it impossible to ignore moments of real national importance, such as the Stephen Lawrence trial?

2012: In trouble again? The-then Oxford professor of poetry, Sir Geoffrey Hill, criticised Carol Ann Duffy over her linking of modern poetry with texting. In a lecture at Oxford, Hill, who died in 2016, and is known for the “difficulty” of his own poetry, said: “When the laureate speaks of the tremendous potential for a vital new poetry to be drawn from the practice of texting she is policing her patch. And when I beg her with all due respect to her high office to consider that she may be wrong, I am policing mine.”

2013: Carol Ann Duffy organised a reception for poets to meet the Queen and the Duke of Edinburgh at Buckingham Palace that provoked controversy in some quarters. One poet who certainly enjoyed himself there, Ian McMillan, tweeted afterwards: “Lovely evening … I spoke to Pam Ayres and Geoffrey Hill. Result!”

2014: The poet laureate led a protest poetry reading outside Pentonville prison in north London, against a government ban on sending books to prisoners imposed by the-then justice secretary, Chris Grayling.

2014: She looked back at her first five years as laureate with a new collection. Ritual Lighting (Picador) containing 16 poems written on subjects including the 400th anniversary of the King James Bible, the Icelandic volcanic ash cloud of 2010 and the Hillsborough disaster. In an interview with the Guardian, she said that when she was appointed laureate, "I wanted to continue to write as I always had, and I have tried very hard not to write a poem I previously wouldn't have written. There always had been a public element to my work, particularly during the Thatcher years, and I think all poets, to a greater or lesser degree, need to have a finger on the national pulse." Ritual Lighting contains work that had been commissioned as well as poems in which Duffy had spontaneously responded to events. "A poem like 'Liverpool', which was published at the time of the Hillsborough report, was something I would have written anyway," she said. She also wrote a poem to mark the Queen's diamond jubilee, but said there had been no official pressure for her to write on royal subjects. Her most important connection with Buckingham Palace is through the Queen's gold medal for poetry, which is awarded every year: "The Queen takes a big interest and we have a lovely day at Windsor castle."

2015: In a review for Write Out Loud, Judy Gordon reported on Carol Ann Duffy’s appearance at Manchester literature festival, and included these remarks by the poet laureate … “while there is no requirement to write poetry to mark events, she smiled ruefully at those who criticise her, quoting Daily Mail headlines alleging she had ‘refused AGAIN’ to create a poem on demand and adding ‘people who demand a poem never read it’. “

2015: She became a Dame in the New Year honours

2017: Carol Ann Duffy is also professor of contemporary poetry and creative director of the Manchester Writing School at Manchester Metropolitan University. In a special article for Write Out Loud, Linda Cosgriff wrote of the magic moment “when the poet laureate hands out free books, takes you across the road to the pub and buys you a drink and, when you ask for some advice says, ‘That’s what I’m here for’.”

◄ 'Even then they looked alive, survivors with no sickness to survive'