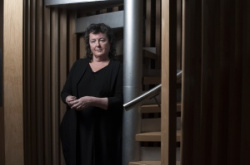 An Evening with Carol Duffy at the Manchester literature festival was billed as the launch of the poet laureate’s first collected poems, but there was a slight hitch – no book. The German printer has gone broke, the host, critic and writer Rachel Cooke announced.

But there was still a table groaning with Duffy’s other books and although there may have been some disappointment among the sell-out crowd in the wondrous space of Halle St Peters, Duffy more than made up for it with her warm, slightly shy presence.

She began by reading ‘Head of English’, her sharp, almost cruel response to a school visit, and a teacher pointing out to her pupils: “Not all poems, sadly, rhyme these days. Still. Never mind.” It’s a glorious riposte which Duffy started writing on her way home from the school, “ a poem of revenge”. Does that teacher recognise herself, I wonder.

Duffy reckons the reason her publisher suggested she should put together a collected works, including some new poems, is because she will be 60 at Christmas. She recalled one of her heroes Ted Hughes saying it was like being put in a coffin, but she had found it liberating. And reading the proofs she had remembered the place where each poem was born.

She's beautiful. I dream about her

in my attic bed; picture her dancing

with tall men, puzzled by my faint, persistent scent

beneath her French perfume, her milky stones.

knowing the pearls are cooling even now

in the room where my mistress sleeps. All night

I feel their absence and I burn.

Duffy is Glasgow born and Stafford raised, but very much thought of as belonging to Manchester as professor of contemporary poetry and creative director of the Manchester Writing School at Manchester Metropolitan University. She is halfway through her laureateship and clearly loving it, especially the opportunities it brings to encourage and nurture young and unpublished poets. While there is no requirement to write poetry to mark events, she smiled ruefully at those who criticise her, quoting Daily Mail headlines alleging she had “refused AGAIN” to create a poem on demand and adding ”people who demand a poem never read it”.

Asked about the state of poetry today, she said her life was no different from any other poet’s: “it’s just that I have more light shone on me”.

Probably the outstanding moment of the evening was when Duffy channelled her inner Meryl Streep to read the sonnet ‘Weasel Words’, inspired by Margaret Thatcher, based on Hansard reports and informed by the knowledge that weasels suck eggs empty.

Let me repeat that we Weasels mean no harm.

You may have read that we are vicious hunters,

but this is absolutely not the case. Pure bias

on the part of your Natural History Book. Hear, hear.

Duffy spoke warmly of her encouraging teachers, the granddad in Scotland who sent her books and letters filled with drawings, her love of Alice in Wonderland , her mum making up bedtime stories and her enthusiastic use of her local library, the book of her own poems typed out by a teacher and tied together with a shoelace. She read two of her poems inspired by her daughter, ‘Prayer’ and ‘A Child’s Sleep’, and then went on to talk about her decade living in Liverpool, influenced and encouraged by Adrian Henri - “He took me to galleries and plays” - studying at university, working in the Everyman theatre bistro and eventually writing plays.

When she felt confident enough to make the decision to be a working poet she won an award, moved to London and was awarded a fellowship, all the time honing her craft. Asked if there was a moment when she felt she had “soared” as a poet, Duffy pondered and puzzled before admitting there was no one point: “The next poem is always the first poem. Sometimes a sonnet takes a week to write, or it might take years.”

Her thoughts on the alchemy of writing: “The idea is there and starts on a chemical level in the body. It’s like a cigarette burn … sssssssss. And there are hundreds of unborn poems. I don’t think poetry is written in an emotional state, unlike with painters. I have to deliver it cold. A lot of it is to do with memory.”

Answering questions from the audience she named Dylan Thomas, Ted Hughes and Shakespeare as constant inspirations, and confessed that the only time she had a chance to meet Hughes she was too shy and hid. She said she enjoyed being part of the school poetry set texts although she noted drily: “We have no choice in what’s chosen and we don’t get paid!”

For her last poem Duffy chose ‘Liverpool’, written as poet laureate, and published in the Liverpool Echo in 2012 to mark the release of the independent panel’s report on the Hillsborough disaster:

nor the Liver Birds, mute in their stone spell;

nor the Mersey, though seagulls wailed, cursed, overhead,

in no language for the slandered dead...

not the raw, red throat of the Kop, keening,

or the cops' words, censored of meaning;

not the clock, slow handclapping the coroner's deadline,

or the memo to Thatcher, or the tabloid headline...

but fathers told of their daughters; the names of sons

on the lips of their mothers like prayers; lost ones

not a matter of football, but of life.

Over this great city, light after long dark;

Truth, the sweet silver song of the lark.

Now get that printer up and running, so we can get hold of the collected works.