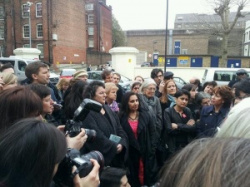 The poet laureate, Carol Ann Duffy, has led a protest poetry reading outside Pentonville prison in north London, against a government ban on sending books and other essentials to prisoners. Jo Shapcott, Ruth Padel, Sean Borodale, Imtiaz Dharker, David Hare, Vanessa Redgrave, Shami Chakrabarti, AL Kennedy, Tracy Chevalier, Kathy Lette, and Samuel West also took part in the reading on 28 March, dubbed ‘The Ballad Of Not Reading In Gaol’. The justice secretary, Chris Grayling, has been urged to remove the restrictions, which have been in place since last November. The campaign by the Howard League for Penal Reform is backed by Liberty, English PEN and the Royal Society of Literature.

Ruth Padel said after the protest, on Twitter, that she had read Michael Donaghy's poem 'Machines', and that "machinery of grace", from the poem, was "notably lacking in Tory approach to prison". She added that Jo Shapcott had read Keats's 'On First Looking into Chapman's Homer', about discovering a book for the first time. Carol Ann Duffy read her own poem, 'Prayer', and Vanessa Redgrave read a poem that she had written that morning;

Frances Crook, chief executive of the Howard League, said: “We are delighted that so many famous authors and other eminent figures in the arts are supporting our campaign to ensure friends and family can send books and other essentials to prisoners behind bars. That the poet laureate, Carol Ann Duffy, has volunteered to arrange this reading outside Pentonville speaks volumes about the opposition that the Ministry of Justice faces on this ill-thought-out and petty measure.”

Chris Grayling has sent a long, open letter to Carole Ann Duffy defending the government's policy, which concludes: "I hope you will accept my invitation to see the work done with books in our prisons, but I hope you will also understand that I could not possibly allow prisoners to receive regular parcels from home and in doing so put in jeopardy the efforts of prison staff to keep drugs and other illicit materials out of prisons."

On the trail of Ted Hughes: more twists in tale of biographer's row with estate ►

My reaction is the same as MC Newberry's, and for access to particular books there are clearly alternatives to having them sent directly from home.

That aside, it does seem even from the occasional media coverage that our prison system is in serious trouble. For instance, I find it deeply disconcerting services are being tendered out to private companies.

Indeed, Frances. What is the point of these people reading, they asked when the idea of educating all children was mooted in the early nineteenth century. As for prisoners...

I am always wary of protests which appear to
indicate official error yet may, in fact, be
ignoring the complete picture.
What of prison libraries? Are these now out of
bounds? If so, then the error is indeed wrong-headed.
Chris Grayling MP mentions packages from outside
prison walls. Are these being used to include
otherwise innocent items that serve to smuggle
less educational content? Books have a history
of being used for this purpose...often with
great skill.

Remind me which century we are living in again ...