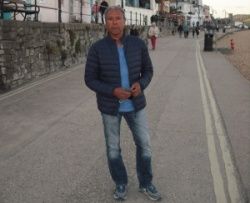 This week’s Write Out Loud Poem of the Week is ‘When in Some Distant Time (For Imogen)’’ by Trevor Homer, a touching and nostalgic recollection of a distant time and a special memory. Trevor’s piece is cleverly structured, moving and uses language and imagery to great effect.The poem has a lyrical quality and shows real warmth and tenderness towards its subject matter.

It is a worthy Poem of the Week winner and below Trevor answers our Q&As and reveals some more about himself.

What got you Into writing poetry?

What got me in to writing was a love of words. Not writing, just words which have always fascinated me. How words are spelt, their use and power. From that, my introduction to Bob Dylan and hearing Subterranean Homesick Blues, opened up the possibility of using language in a different style. Then came Eliot, Auden, Frost, Ginsberg, Whitman etc - the list goes on.

I have been writing since I can remember, but early teens in terms of actual poems. Rubbish, really, but it was a way of learning to use language in an expressive way.

I go to my local Open-mic gigs in Stourbridge called Permission To Speak, at which I read stuff. I also enjoy other poets and am fascinated by the many ways people interpret their feelings.

My favourite poem is probably a song poem by Bob Dylan called Its Alright Ma, I'm Only Bleeding. On hearing it Ginsberg recognised that the baton had been passed on from the Beat poets to a new generation of writers, of which Dylan is the master, in my opinion.

If I were cast away on a desert Island, my luxury would a pen and paper

When In Some Distant Time (For Imogen)

When, in some distant time; no, I don’t mean

Those halcyon days of summer, when you are busy

In a world adults cannot enter.

Or splashing on shorelines, held tightly by the eternal bond

Of mother and father; or else falling in long grass

Grown taller than your head, while running so fast,

You were a blur to others.

You grew so quickly, so they said

No, I don’t mean then. Nor when, in some distant time,

The angst of adolescence struggles to accept the warm embrace

Of loves familial holy grace, and self-identity is all.

No, not then either as I recall.

When, in some distant time; but not those cool nights of autumn,

As the first flush of a young woman’s blush

Lingers on your cheek, radiant as the glowing embers

Of late September’s sun. When questions,

Along with the lamps were lit.

I have it in mind, that in some distant time,

When spring is masquerading as summer,

And you are all wide open;

Then, you may remember when I took up my pen;

Imagined you standing, hand in hand,

On the threshold of the aisle,

And through the veil of time and space,

Offered up a smile.

A really warm, wholesome and utterly human piece of writing which reaches the skies, where it belongs. Thanks so much.
Peter T

A wonderful lyrical trip through a very personal experience with a sense of wonder and love, all the ingredients that make a great poem in fact. I think the pondering nature of the writing really gets to the point. Congratulations on getting front page.

a gentle poem taking us through difficult time

A gentle and delicate trip through the years of a life and its meaning
to another. Many of us will have variations of the theme to recall
in our own lives.

lovely poem, and congratulations on poem of the week.

Of late September’s sun. When questions,
Along with the lamps were lit.


I love these lines in particular

This is a beautiful poem Trevor. Well-penned. As a father of four daughters, I identified with every word. One day back when they were small, and I was young. John

Congratulations on this award which is richly deserved. I too am a great fan of Eiolt, Auden, Whitman and Ginsberg as they all inspire me.

Your poem is an interwoven tapestry of beauty and imagination.
Thank you for this.

This resonated with me Trevor I loved it.

I took so much from this Trevor. For me, it represents a powerful, sensitive depiction of watching a daughter's awakening. Well deserved POTW. Congratulations.