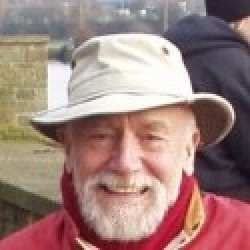 Alan Travis Braddock has only started posting his work on Write Out Loud very recently – Glenbrittle - the loch is the second poem he's shared with us – but he's been writing for much longer, as his responses to our Q&A make clear. His beautifully crafted poem is a worthy winner of our Poem of the Week accolade, as you'll see. We look forward to reading more of his work over the coming months!

I was in the Boy Scouts and got into walking and camping  and everybody I met liked singing and then I tried writing my own songs, not many were memorable and then I started writing down my own thoughts in poetic style. Most of this was pretty juvenile and introspective. It took me a long time to get out of this. Sometimes I look at what I wrote then and wonder what I was thinking of.

I suppose I started when I was about 19, on leave from the RAF and tramping in North Wales. I was seriously into what I think of as the romantic period of Rock-Climbing, when we did it for fun and excitement and not as a 'sport'. So I've been writing intermittently for about 67 years. (Yes, I really am that old).

No. I went to one in York about 5 years ago and found myself shoved aside in favour of the organisers mates; I've been a bit shy since. Young people don't really like an old man telling them what to think about.

As a personal poem - 'Death of a Son' by Jon Silkin. I first read it in 1972 and I haven't found anything to match it for directness and impact. It made my daughter cry. I also like quite a lot of Sylvia Plath - 'The Munich Mannequins' and 'Metaphors' for instance. The best first line I ever read was from the former " Perfection is terrible, it cannot have chidren." Think about it.

A decent sharp axe. I still have the Boy Scout skills that I learnt years ago.

Into this wide lap she lays
For the long slow curl of waves
The land receives the sea below,
Liquid alien element aflow
All among her secret caves
Darkly shining kelpy graves
And slipping far beneath she feels
The silken sensualities of seals.

The sea moves in, the scour moves on
The wrack heaves up to fall again
The next bay lays, the fish recoil
The rocks inlay their flanks with oil
The shingle shirrs the granite grinds
The deep wears crystal down to sand
While slipping far beneath we feel
The silken sensualities of seals.

The scene now changes, beyond the ranges
The crust now slips below the wave
The granite too will hunker under
And water comes to rive and plunder.
Your gods have no experience here -
Mere time to watch it crush and  sear
The power of Earth they can’t deflect
Nor from the surge of tide protect.
And men are drawn full deep to feel
The silken sensualities of seals.

A beautiful, evocative, superbly crafted poem, Alan. Few people will read without wanting to re-read it, I imagine.

In my view, the event you went to does not deserve to be called an open-mic. Open to whom?

You are of an age to remember the notion of 'family hold back', the idea that, if there are visitors, you let them help themselves to the food first in case there isn't enough for all. And that has always been a principle of Write Out Loud open-mic events, precisely for the reason you describe. We know how hard that first time reading your words can be, so it is important that no one leaves without being able to read for the first time, even if it means more experienced readers missing out.

If you put your postcode into the search feature on our gig guide, it should bring you a list of any events near you. Perhaps you could return to the York event and write us a review, warts and all. I wrote one of a York event a couple of years back. I wonder if it's the same one?
https://www.writeoutloud.net/public/blogentry.php?blogentryid=48097

Lovely poem - and as Graham says - really reeks - loved darkly shining kelpie graves and the shingle shirrs the granite grinds- all the noises the water makes. Well deserved POTW. By the way you (we) are not that old if we can still feel like this about things!

A beautiful poem completely worthy of POTW. Well done Alan. As most people have said be encouraged to try open mic's again.
Nice one

Inspiring work evoking the rhythm of the sea?.

Thank you all for being so nice about my effort.
For what it is worth, I wrote the first stanza quite a long time ago and then added the other two 3 or 4 years ago. I often go over what I've written, things in non-rhyming verse sometimes seem better when given a rhyme structure after thinking a bit harder about what I'm trying to say.
Thanks again.
Alan

'The deep wears crystal down to sand'

I love that line so much I have committed it to memory.

It's not often that you can smell a poem but this one reeks! So evocative of its setting it stings the nose. Very accomplished work Alan.

This is a beautiful and well-crafted poem, thank you for sharing and congratulations on POTW. I do hope you give open-mic nights another go - they can be really special and bring a whole new dimension to the poetry experience.

I hope you'll give another open mic night a try somewhere, Alan. First impressions can be deceptive, particularly if you don't know many people there. Many open mics down our way in t'south are dominated by older people, rather than youngsters. And here comes the plug ... if you're ever in Surrey, do look us up at Write Out Loud Woking, third Thursday of the month. That goes for everyone else, too!

This is indeed a finely crafted poem, the waves and shingle making beautiful music together. And I sense a climate change theme there, too.