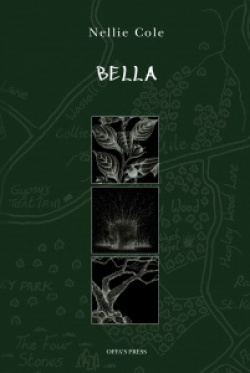 The use of pause breaks instead of punctuation was the first thing that struck me about this debut collection from West Midlands poetry workshop leader and mentor, Nellie Cole. That may sound strange but this is no ordinary book since it takes the form of an unsolved murder mystery that is based on factual evidence with folklore, superstition, hearsay and a great deal of imagination thrown in for good measure. The preface sets the scene for everything that follows on:

“On 18 April 1943, the remains of a woman were discovered inside the hollow bole of a wych elm tree in Hagley Wood, Worcestershire. No investigations, conducted by the police or by individuals, have ever solved the mystery of who she was, who murdered her, or why. Over seventy years later, anonymous graffiti in the surrounding area still asks the same question: Who put Bella in the Wych Elm?”

Nineteen textual pieces, presented in the form of incident reports, extracts of records from the Home Office forensic science laboratory, a copy of a postcard confiscated from a suspected German spy, Bella’s possible last movements plotted on a map, wording on a page torn from the Encyclopaedia of Alternative Medicine found inside scraps of fabric recovered from the tree, a police composite sketch of Bella and a poem cast in the form of an auction where bidding taking place for a piece of the missing evidence, follow on. Since the mystery remains unsolved, the last line of the collection ends with the same question that was posed in the preface: “Who put Bella in the Wych Elm Tree?”

In all of this, which is in effect one long poem divided into three distinct but untitled sections, Cole displays a considerable talent for thinking outside of the box with regard to poetic form and the way she chooses to present her text on the page.

She is at her most lyrical in the sequence entitled ‘Spirits Raise Bella from the Wych Elm’. Here is the first section, quoted in full:

Branches grow weary of their embrace

they drop her   her brittle marionette limbs

clattering as they fall   to the frozen forest floor

A tug on her strings   and she unfolds

along the path and up   to the brow of the hill

to where Four Stone sisters   hail her coming

The smallest   west-facing   branded with a star

folds her in her nurse’s arms   and together

they thaw her limbs   knit up her bones

her eyes open   and she is born again

Literary references to Shakespeare’s King Lear and Macbeth and other references to various persons who were connected to the investigation – a forensic psychiatrist from Birmingham University and an RAF recruit who volunteered to guard the wych elm between the discovery of the body and its removal the following day, persons who were under suspicion and a fictional character (Bella’s daughter) - are to be found within its pages and appear in a helpful glossary at the end.

This is a thrilling debut by a young poet with a sense of adventure. Recommended.

◄ A History of Gay Poetry, 1: A Bare Canvas