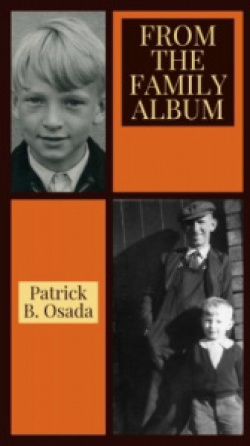 Patrick Osada’s seventh collection opens with a series of poems about his upbringing in Gloucester, with homely memories of a family butcher’s shop, weekday washes in a big tub, including that marvellous mangle moment – “the fat, wet clothes were magically thinned” (‘The Oval, Gloucester’) – and the skills of French polishing, too. These are poems of warmth and affection, where moments of illumination creep up on you. Later in the collection the mood changes, when he revisits Gloucester forty years on, and laments that the “fading dowager I’d known / who lounged close by the Severn’s side” now

Lost heritage is what we find –

a cheapness and a dumbing down –

the old Guildhall become a bank,

a row of Tudor buildings gone,

the place to view the Eastgate walls

a perch for dossers, dead-eyed kids.

This is very much a collection, as its title suggests, that is about looking back. Poems about childhood include ‘50s Incident’, putting pennies on the railway line to be run over by “a hundred wheels of steel”; ‘The Tree’, a rite of passage that the young Osada passed; and ‘The Secret’, a revelation that this was not an idyllic childhood. Even now he is unable to say why, only offering dark hints about memories of an “old dark old house” that still makes “my blood run cold”.

Osada is confident about writing about familiar yet important matters, such as the care of elderly parents still living in their own home: “Now everywhere the everyday / is set beside them like a trap”(‘On My Mind’). In ‘Brief Encounter’ his elderly father still “swarms” up a ladder to show his son how to properly clean a window. However, ‘Out of the Kitchen’ is a more mournful listing of the redundant and unused contents of a kitchen cupboard: “I discover your hoard of bottle plums, / now out of reach … and sight … and mind … and date.”

A final section titled Holiday Snaps includes an amusing poem about the Peggy Guggenheim museum in Venice, that concludes with a startling statue on the terrace overlooking the canal: “the hard-on Angel so exults / the city view he overlooks / you half expect to hear him shout.” Osada also notices that the famous manhood of Michelangelo’s David in Florence seems “rather small”; while there is a poignant vignette of an older couple saying their final goodbye to Venice (‘To The Splendour, To The Past’).

More often than not, these poems, put together with unobtrusive and rhythmic craft, seek some kind of resolution; and more often than not, it is one that satisfies the reader. A final poem, a villanelle added during lockdown in the poet’s home in Warfield, Berkshire, remembers a favourite place - the river Tresillian at St Clement in Cornwall, “when the wind and silence are the only sounds”.

If all this sounds quintessentially English, well, it isn’t quite that. In ‘What’s in a Name?’, Patrick Osada explains that his surname came from his Polish dad, who escaped from his country during the war to England, to work on fighter planes, while Patrick is “homage to an Irish Granny …   As icebreakers go, it’s not too bad.” And maybe such a background explains why it is well worth giving these poems a second glance. They do repay re-reading, to truly appreciate their decent, unassuming values, and persistent music.

To purchase a copy, email ptrosada@aol.com