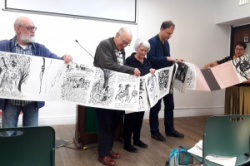 Free Verse’s Poetry Book Fair at Conway Hall in London would still draw the crowds, even if it was just about selling books – but it is always a lot more than that. The event, built up by organisers Chrissy Williams and Joey Connolly over the years, includes workshops, discussions and readings, as well as the chance to greet long-lost poetry friends, and is always a great day out.

So it proved on Saturday, with some unfamiliar new publishers on the stands. A few of the big names and some other publishers were up in Hull this year at the BBC spoken word festival, Joey Connolly explained, and that had freed slots to enable a greater diversity of smaller presses to attend.

Small? You’ve got to be kidding. One of the highlights for me was David Henningham demonstrating the versatility of his glue-free, concertina, Henningham Family Press publications, that just got bigger and bigger, finally “exploding” across the room with the aid of poet Sophie Herxheimer and audience members, pictured above. 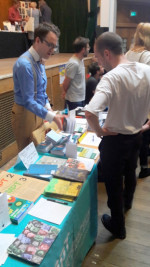 There are always good discussions, too. The Meet the Editors chat, with input from publishers at Seren, Burning Eye and Sidekick Books,  was at 11am, unfortunately too early for me, but the mid-afternoon Making a Living as a Poet! forum was another matter, and merits a separate report of its own.

The first reading in Conway hall’s Brockway Room – there was also a programme of readings outside in Red Lion Square’s gardens, beside the café  – was by several  poets included in the Valley Press anthology of Yorkshire poetry, published earlier this year. It contains poems about many familiar places, and others not so familiar, such as Hannah Stone’s found poem of names on an Ordnance Survey map: “Whaw! Booze Common. / Little punchard. / Great punchard gill. / Gillhead moss.” (‘Anatomy of a Landscape’). Patrick Lodge’s ‘Mary Bateman’s Lament’ featured an alleged Leeds witch who was hanged; afterwards strips of her skin were sold as charms. The other readers were Carole Bromley, Oliver Comins, Fokkina McDonnell, Fiona Ritchie Walker, and Michael Shann.

Artist-poet Sophie Herxheimer joined David Henningham in demonstrating the versatility of the Henningham Family Press concertina bindings, including a British Council commission printed live in Moscow, Herxheimer’s own 30 metre long The Listening Forest collaboration, and her new homage to Emily Dickinson, Your Candle Accompanies The Sun.

After that, a spot of lunch amid poetry acquaintances at the Garden Café. Disappointing that there was a big gap between al fresco readings at the time, but I suppose everyone needs a lunch break. Plenty of time to bump into people, anyway, including Write Out Loud's own CEO Steve Pottinger, down from the West Midlands to check out all the fun of the fair. 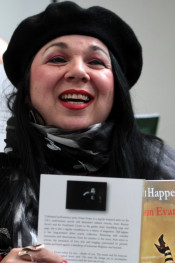 Back to the Brockway Room. William Cornelius Harris Publishing’s five poets, including a couple of my lunchtime companions – Amy Deakin, George E Harris, Nick Eisen, Rick Dove, and Susan Evans – all offered differing performances from their collections. Deakin donned an orange wig and gave a marvellous Trump impression; Eisen prowled about menacingly as he delivered a poem about secret services; while Susan Evans, pictured right, choreographed and stole the show with a stunning poem that began as a love poem and ended as an elegy. It also featured brown sauce.

Shortly afterwards there was another enjoyable, all-too-brief reading by Karen McCarthy Woolf and Pascale Petit, from their collections selected by the Poetry Book Society, Seasonal Disturbances and Mama Amazonica. 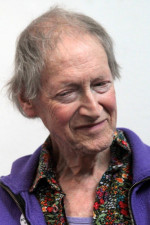 There was a full programme of readings in the main hall in the evening, but I had to go at five. I felt I finished on a very high note, though, witnessing a zany and entertaining session from Michael Horovitz’s Live New Departures, featuring the celebrated and much loved poetry performer and impresario himself, his son Adam Horovitz, the edtitor of the Penguin Book of Modern Urdu Poetry, Mahmood Jamal, songstress and occasional harmonica player Vanessa Vie, and the phlegmatic John Hegley, who found himself both top of the bill and with the least amount of time left to perform. He took it in his stride, of course.

Michael Horovitz took a moment to mention his disapproval of poets who admire Philip Larkin, although he had found the man himself to be “a charming guy, we met a few times, shared a great love of jazz”. He also managed to tootle a few notes on one of his trademark weird instruments, concluding philosophically at the close: “Poetry readings are never finished, just abandoned.” Phew! Afterwards a poetry friend enthused:  “It’s the spirit that I love! It’s what got me into poetry all those years ago.”