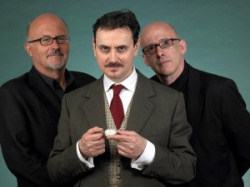 The poetry to music group Little Machine have written a song for Hull to welcome in its City of Culture year in 2017. They performed ‘River Song’ by the group’s Steve Halliwell on BBC Radio 4’s The World Tonight.

The song begins: “River, oh river, you never slumber / An infinite number of dreams on your tide”. The tribute to the "muddy old Humber" includes a list of “the things that Hull’s given the world”, including poets associated with the city such as Andrew Marvell, Andrew Motion, Philip Larkin, Roger McGough, and Stevie Smith, pop groups The Beautiful South and Everything But The Girl, actor Tom Courtenay, anti-slavery campaigner William Wilberforce, pioneering aviator Amy Johnson, the Land of Green Ginger, white phone boxers, and John Venn, inventor of the Venn diagram. The BBC will be staging a big poetry festival in Hull in September as part of the City of Culture celebrations, and National Poetry Day has been shifted to 28 September to coincide with it.

Little Machine appeared on The World Tonight and on Jonathan Ross’s Radio 2 Arts Show with the Mersey poet and presenter of BBC’s Poetry Please, Roger McGough, who lived and worked in Hull, and knew Larkin. Little Machine have been touring with McGough in 2016,  and will be doing so again this year, starting with a gig at Liverpool Playhouse on 28 January that will also feature Brian Patten, to mark 50 years of the bestselling Penguin anthology The Mersey Sound. They have recently released a CD of McGough poems set to music called The Likes of Us.