As in Judy: Rosie Garland, Flapjack 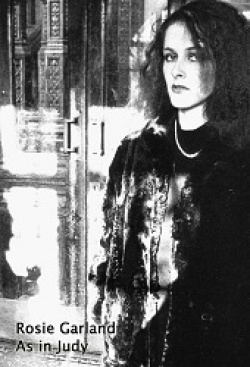 In a neat twist, the collection’s cover design puts the poet’s name directly above the title, offering us Rosie Garland As in Judy. It might seem ironic, with five books of poetry already to her name (three in her alter ego, singer Rosie Lugosi) and two award-winning novels (a third hot off the press), that Garland chooses to hitch a ride on the coat tails of a Hollywood name. Or perhaps, appropriate. Because As in Judy is a journey into how to hold on to identity in the face of some brutal facts of life.

The opening poem, ‘Asking for Directions’, encapsulates the road without maps that people living with cancer are forced to travel:

Your sat-nav? It won’t work here. Feel your way

with the bravery you used to have when you crossed

roads without looking. Keep going. You can’t miss it:

the sheer drop, the view back with its tarpaulin

of smoke, all those wooden markers.

Garland (as in Rosie) divides her collection into two main parts, with a five-page poem about suffragettes making up the final part. The first section contains poems about a tough childhood with imposed moralities, together with poems about her cancer experience. Irony and a biting humour often simmer under the surface. Her favourite uncle buys her “the perfect present: a tiny suitcase for my doll,/ big enough for running away.” Her mother “tucks in/ the sheet of marriage, husband, children; tucks it tight.”  Garland cocks a snoop at the idiocy of rigid beliefs, constructing a long list which includes the amusing (and hopefully historical) “Only girls with long blond hair can play the Virgin Mary./ Those with dark hair are the sheep.” And ends with a kicker: “Your boyfriend will love you forever and never leave you/ if you just do what he wants.”

Imagery and original turns of phrase abound. Garland has a deft touch, rarely egging the pudding, leaving the reader free to explore the depths at their own pace. A boy who “does things with wire/unraveled from the youth club fence” is also probably an abuser: “His bike chain split/ in sticky loops across the lounge carpet. His sister/ unparcelled, to see what makes her tick.”

The section ‘Flesh and Skin’ contains some of the most powerful poems of the collection. They include the ekphrastic, poems from the battlefields of sex and a pitch-perfect poem in the voice of Elfrida Howard, wife to Colonel Victor Barker who was imprisoned for impersonating a man (he had been born a woman).

Garland can deliver subversive in the most delicious ways. Her poem ‘Mary of the Desert’ is a wonderful inversion of the religious ascetic who “prayed/to be whittled to a twig,/ all sap sucked out” and ends up dining on steak tartare and dancing the hootchie-kootchie. A few of the “cancer poems” can feel too raw. But in ‘Departure Lounge’, Garland says it in a brilliantly worked metaphor. “I’ve come to join those eager to be gone;/ where leaving is longed for and return is a dirty word.” The pain is left unpointed, but bleeds through the sparseness of her phrasing: “You left at 3am, while the night was still licking/ its lips. Your final destination is not listed/ alongside Alicante, Palma, Arrecife. The tests/ said up to a year. I hoped you had a longer stay”.

This is a fine collection, with important things to say and original ways of saying them. “We’ll be a long time quiet./ While we have breath, shout; taste fire.”  Garland’s words really do crackle.

Claire Booker’s debut poetry pamphlet Later there will be Postcards is published by Green Bottle Press. Her poems have appeared in Ambit, Magma, the Morning Star, North, Rialto and The Spectator among others. She is also a playwright whose stage plays have been produced in America, Australia, Europe and the UK.

◄ 'What I want tonight is lipstick. As pure a red as I can find'

I am so sorry I missed the Manchester debut in December. The review here is excellent, and I certainly plan to get a copy of Rosie's new book. I hope Word Central has copies at the January event.

That photo on the cover is dynamic - ecstasy or nightmares, I'm not sure which - but gripping.