Another stab at the charts? Roger McGough teams up with Little Machine 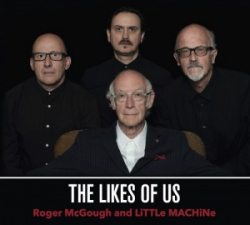 Back in the 1960s he hit no 1 with Liverpool pop group The Scaffold. Now Roger McGough, Mersey poet and presenter of BBC’s Poetry Please, has teamed up with poetry band Little Machine to record 12 of his poems set to music.

McGough and Little Machine - Chris Hardy, Steve Halliwell and Walter Wray - have been touring together this year, including performing to two 900-seat full houses at the Hay festival. They got together to record The Likes of Us after the Hay audiences requested recordings of the poems that McGough had just performed with Little Machine on stage.

Over the summer McGough recorded a dozen of his poems, with music composed and played by Little Machine in a variety of styles. He said:  ‘I first saw Little Machine on stage in 2013 and loved their ability to turn classic poems into rock ‘n’ roll anthems. I wanted to join the band then and there but they wouldn’t have me. (Feeble excuses about my not being able to sing, or play a musical instrument). However, they did like my poems and this CD features the band’s musical settings of a selection that audiences have warmed to.”

He added: ‘I’m really energised by working with Little Machine ... they make the poems come alive and treat them with respect as well. They’ve even got me singing, so they’ve got a lot to answer for.”

Little Machine, who set famous poems to music and have performed with Carol Ann Duffy and Gillian Clarke, first met McGough when they were booked together by poet and venue organiser Alison Hill at Rhythm & Muse in Kingston several years ago.

The final, title track on the CD, ‘The Likes of Us’, includes a nod to McGough’s memorable ‘Let Me Die A Youngman’s Death’ in the bestselling 1967 Penguin anthology The Mersey Sound, which also included fellow Liverpool poets Brian Patten and the late Adrian Henri. ‘The Likes of Us’ includes these lines:

Not a drunken binge, dirty syringe,

‘What a waste of a life’ death

The band’s next performance with Roger McGough is at Canterbury festival on Wednesday 26 October.

Background: 'Poetry suddenly could be fun'

◄ The public and the personal: reasons why Laura Taylor looks back in anger