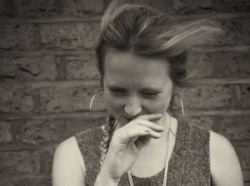 I reckon that if you’re a spoken word virgin you might as well start at the top and my friend certainly did that when I took him to see Hollie McNish and Salena Godden at Gorilla, an event that was part of Manchester literature festival.

Hollie McNish’s performance was based on poems and diary entries from her book Nobody Told Me (highly recommended). She is a warm and engaging character, well known from numerous TV, radio and millions of YouTube appearances, but she can take you by surprise with her searing commentaries. Sometimes the sharpest observations come from the quieter voice, not the screamer.

I’d been listening to her terrific interviews on Radio 4’s Woman’s Hour this week with women talking about their experiences of childbearing, and she is as good at getting insight from others as expressing her own. Her show on Wednesday night (for which she wore a T-shirt bearing a gorilla in honour of the venue) included diary excerpts as well as poetry, and she is a prolific and effective  recorder of her thoughts and emotions.

Hollie McNish is brilliant at conveying the pressures imposed on western women to do pregnancy “the right way” with the nagging incantations about how big the growing child inside should be in ‘Fruit Babies’  – now a banana, now an aubergine. Having seen this at work during a recent family pregnancy I confessed to being bemused by it but was told this was “how it’s done now”.

And then she records the increasingly hysterical nudging towards decisions that must be made about using the “right” products – baby wipes, nappies, food, toys etc - that rises to fever pitch, followed by incantations to be calm and avoid stress which can be bad for your baby. It made funny but painful listening. She had some useful hints about the actual delivery and mused that maybe Salt-N-Pepa’s Push It might not have been the best choice of music. And her tender and loving descriptions of feeding her new baby “abseiling” up her body in the quiet of night are gorgeous.

You might already have heard McNish’s poem ‘Embarrassed’ about the hypocrisy of complaints about breast feeding in public while surrounded by naked breasts on billboards and in newspapers and magazines. She revealed that her outspokenness about breastfeeding and the pressure to use powdered milk produces hate mail from men and women that is frankly shocking. It is an astonishing piece of work – angry but never losing its message, and so good that it is used to encourage breastfeeding by midwives and Unicef.

Perhaps the most raw, honest and painful writing concerns her conflicting views about sex after birth, when told at her six-week health check – “You are ready for sex now” – “oh no I’m not”.  She finished with a lovely poem written in Australia when she was often asked if her darker-skinned baby was “hers” and then an hilarious description of when the toddler had a volcanic tantrum in the street. It lasted all of eight minutes but felt like a lifetime while the world walked by, judging her an unfit mum, with the most vocal critic of all a drunken man.

Salena Godden, what a contrast. In your face, loud, stomping , pointing, curls shaking, legs wide apart as she grabs you by the throat and pounds home her thoughts on women doing whatever they want.  She then hurtles through ‘You're A Citizen Of Nowhere’:

We did not vote for Mrs May

This harsh and xenophobic way

Flying flags for the far right

Here is May: Hate, spite and fear

Cruel winds do shake the darling fists of May

No tolerance or kindness on display

Citizen of don't care, citizen of no welfare

She does a hilarious take on the clickbait prejudice and hate of the Daily Mail Online with ‘Joe’ which is so accurate that it hurts. I found it one of her most powerful pieces:

Godden is acidly observant but funny too and heartbreakingly honest. Her scene setting for ‘The Wasp’ when she compared her gauche self with the icy cool of a beautiful Berlin girl sitting nearby was hysterical and I found the piece personally painful. Been there, felt that.

She appeared earlier during the literature festival promoting The Good Immigrant, a collection of writing by black and minority ethnic writers on race and racism, and I’m sorry I missed it. In this show she read ‘Shade’ and on the back of that and a couple of extracts I’ve seen elsewhere I am off to buy it now.

So, two women spoken word poets. Both strong, personable, brilliant. Couldn’t be more different, couldn’t have created a better evening. And a great introduction to the genre for my mate, the poetry virgin. He’s convinced.

◄ Find your poetic voice! Sign up for our first poetry workshop with Saili Katebe

They're both excellent artists, Judy. I only wish I'd been there to see them too.