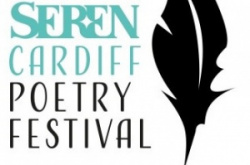 The 2021 Seren Cardiff poetry festival began on Thursday 15 April with four days of online readings, workshops and events. All the events – apart from the workshops – are free.

Benjamin Zephaniah will share his Desert Island Poems with Rhian Edwards. Cerys Matthews presents her new poetry/music crossover album We Come From the Sun, and there will be readings from Tishani Doshi, Joe Dunthorne, Pascale Petit, Patience Agbabi, Katrina Naomi and Kim Moore.

Professor M Wynn Thomas will discuss his book The History of Wales in Twelve Poems with poet Gwyneth Lewis, while Poetry Wales hosts a party with various guest readers from the magazine.

New voices include Natalie Ann Holborow, Mari Ellis Dunning, Abeer Ameer and Alex Wharton, as well as more familiar artists like Paul Henry and Brian Briggs (of Stornaway) performing their music/poetry collaboration, Cave Songs. Christopher Meredith is launching both his novel Please and poetry collection Still, whose publication side by side on the same day is a rare, if not unique, publishing event.

Welsh-language poets Mererid Hopwood and Menna Elfyn expand the narrow walls of Lockdown through poetry from their own rooms on either side of the river Tywi in Ceisio’r Neuadd Fawr (Seeking the Large Hall). There will be dual-language readings from Troeon : Turnings, a Welsh/English collaboration between Philip Gross, Cyril Jones and artist Valerie Coffin Price; and Let Me Tell You What I Saw, an Arabic/English translation of Adnan Al-Sayegh epic poem Uruk’s Anthem translated by Jenny Lewis.

There are also several workshops with tutors such as Jonathan Edwards, Tishani Doshi, Katrina Naomi and Christina Thatcher. Spaces are limited though so book fast.