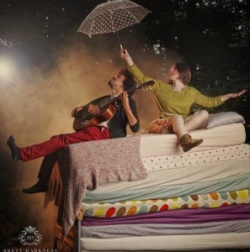 In the week that a headteacher gave pyjama-clad parents a dressing-gown dressing down, Manchester’s Z-Arts’ Family Theatre invited audience and staff to turn up thus clad to both Saturday showings of Louise Fazackerley’s The Sleepover, her iconoclastic take on The Princess and the Pea.

As we retrieved our tickets at the desk, the woman serving us explained that she had rushed out in her dressing gown because she was late. It took a minute or two for the penny to drop, as we saw children engaged in the pre-show craft activities, sitting round in their PJs.

Hans Christian Andersen’s retelling of a Nordic folk tale was condemned by critics on its 1835 publication for its lack of morals, its humour and colloquial language. Andersen had defended it, pointing out that he had wanted the language to be similar to the spoken word, and his stories to be for children, but that “adults too should be able to listen in”.

The nearest to moral laxity being the pyjama party premise, Louise’s version was clearly for both child and parent – for family - audiences, cleverly adapted for the realities of today’s complex families: dad living away, new dad, no dad at all,  ensuring no child, no parent present could feel excluded or judged.  In fact they were well and truly included, with maximum audience participation: tinies tramping round onstage toting umbrellas and both age groups given their own lines in the script, basically a long poem in Louise’s captivating style that has won her plaudits and commissions aplenty.

Her theatre studies background is apparent in the physicality she brings to her performance as she rolls on, off, under and around the mattress-piled bed, dances around the stage, all the while maintaining total audience rapport. Physical even to the point of doing a mischief to her calf at the second house.

It is basically a one-woman show, supported by Lee the Music Maker on sound effects and guitar. The set is cleverly conceived, the script and performance warm, engaging, cosy as a duvet enveloping her audience in her retelling of this classic tale.

In a Guardian article she wrote that she is happy that she writes “poetry for common people. Common people like me.” Her talent is uncommon, yet it speaks to and from the people she knows, the people of her Wigan home town, and anyone who lives in the real world, her and our real worlds. You might call this show life affirming; real life affirming.