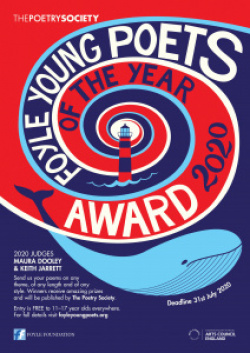 The Poetry Society has announced today the top 15 winners and 85 commended poets of the Foyle Young Poets of the Year Award 2020 at a virtual prize-giving ceremony.

Young writers from a record-breaking 118 countries (an increase from 76 in 2019, 79 in 2018) entered the competition from as far afield as Afghanistan, Ecuador, Mozambique, North Korea and the Seychelles, as well as every corner of the UK. From these poems, this year’s judges Keith Jarrett and Maura Dooley selected 100 winners, made up of 15 top poets and 85 commended poets.

The 85 commended poets were:

Keith Jarrett said: “It’s been a privilege judging this year’s prize. At a time when so many of us have been physically separated from friends and family, I’ve felt connected to thousands of young voices from around the world [through their words]. The poems have been passionate, political, tender, troubling, humourous and, in many cases, brave. (It sometimes takes a lot of bravery to articulate what it is to exist in the world – especially when this involves feeling anxious or unsafe – and then to send it in for a competition!) Some of the poems responded to immediate events – and this was clearly the case when they referred to Black Lives Matter protests, the pandemic, or recent government actions.

“Others dealt with timeless themes: family, bereavement, cultural traditions, all the uncertainty that comes with adolescence, nature and the seasons, the environment, chickens[!]... I wasn’t expecting such breadth, and it was overwhelming at times. I cried. I laughed. I raised an eyebrow.

“Above all, the confidence of these poems, of these poets was astounding! I truly feel the future of poetry is in safe hands, and it is vital these young voices are nurtured and supported wherever they find themselves in the world.”

Maura Dooley said: “If we had thought for a moment that this long year of Covid, of international unrest, of the tragedies that led renewed attention to Black Lives Matter might make humour impossible, or attention to very personal experience tricky, then how wrong we were. As always, it is language that is the most resilient, flexible, musical, colourful substance we have and how these poets moulded it to their own fabulous shapes!

“Poems came in from all over the world, about all kinds of things written in every kind of way. There were poems of astonishing skill, poems of great tenderness, angry poems, poems that made me laugh and sometimes those were even all the same poem. There were patterns on the page, stories and rhymes, prose poems, haiku and sonnets, there were poems which opened doors to worlds new to me and left me gasping and amazed. What more could a reader ask? Thank you.”

Judith Palmer, director of the Poetry Society, acknowledged the difficult choices the judges faced in a bumper year of competition entries: “This has been a year like no other for Foyle; with the competition launching at the height of the pandemic and the start of lockdown and closure of schools it was uncertain for us how the competition would fare. It has in fact been amazing to see so many entries. Poetry is a source of self-expression, and I think at this time more of us are turning to it to make sense of the world around us, to remember what makes us who we are.”

In response to the quality of writing, and to the circumstances this year that prevented an awards ceremony in central London being held, Keith Jarrett has written a poem dedicated to and inspired by the Foyle Young Poets of 2020, and artist Imogen Foxell has been commissioned to create an artwork that will adorn the Poetry Cafe window in Covent Garden. It brings together motifs from all 100 winning poems. Imogen’s design has also been sent as a limited edition print to the winners.