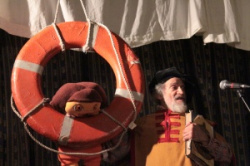 John Agard makes free with anachronisms – indeed, they are part of the joke. Arriving on stage in historic dress as Christopher Columbus, but with a shopping trolley, he extracts various items from it, exclaiming at one point: “From a car boot sale, for a fiver!”

But there is a serious point to Agard’s impish humour. Roll Over Atlantic, the one-man show in which he appeared at the Square Tower in Portsmouth on Thursday night, is a satirical revisiting of “God’s mariner’s” encounter with the so-called New World. Part-calypso, part-cabaret, it recounts with devilish, sideways wit Columbus’s dealings with the indigenous people – “taken by trickery that went by the name of treaty”, his double-dealings with his own crew, his lust for gold, and his eventual fall from grace back in Spain after the queen demanded to see his accounts.

During the show Agard also appears as a shaman, doubles up as a mosquito buzzing energetically around the stage – “we bite democratically”, and in his role as Columbus is chided by the deep, booming voice of the Atlantic, not least for bringing sugar cane to the Caribbean, tainting the ocean with the subsequent tragic cruelty of the slave trade that “counted souls in guineas”.

Roll Over Atlantic points out how renaming places and islands was one way in which invaders and colonisers permanently staked their claims, with islands whose native names meant ‘Island of the Prickly Pear’ and ‘Land of Fish Oil’ becoming Montserrat and Antigua. We see Columbus airily dismissing “talk that some Norseman beat me by centuries”, his determination to convert the locals to Christianity and Old World Ways, making them learn the difference “between prophet and loss”, but adding: “But first things first, we must find their gold.”

When he first enters Columbus has been heralded with all the razzamatazz of an American TV show. Later he brandishes fresh items from his shopping trolley, - a pineapple, “king of fruits, with its spiky crown” –  a chilli pepper, “it burns twice … a multi-tasking spice”, and you absorb Agard’s point about the trolley. All the goods gathered in it have been bought by Columbus at bargain prices, if he paid anything at all. Often the explorer and exploiter bursts into song, accompanied by reggae, calypso, or blues music. At the last he sings: “Bury my bones with my chains” as his star back home is eclipsed.

Roll Over Atlantic, directed by Mark C Hewitt, with music by Thomas Arnold, is wickedly funny, punching home its points about colonialism with entertaining panache, which is very much Agard’s style, and laced with wonderful verse and wordplay. There are many fiery couplets declaimed by Agard, a consummate performer putting his heart and soul into it. This one rather sums it all up: “In the meeting of two worlds there is always give and take. / A shame for the natives it went pear-shaped.”

John Agard will be performing his show in the next few weeks in Hastings, Eastbourne, and at Cecil Sharp House and the Actors Centre in London.