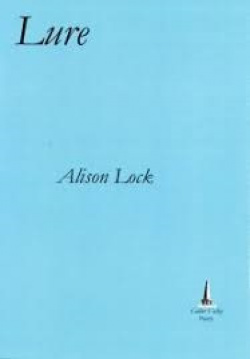 This collection of poems has been salvaged from the depths of a dramatic, near-fatal accident suffered by the poet Alison Lock three years ago, when she almost drowned and broke her back in seven places after falling into a millpond. Lure tells the story of her accident, which happened when she was out walking her dog, and her eventual recovery. In the opening, 14-page poem ‘Revisitation’, she returns to the scene of her intense physical and mental trauma: “I swore I would never return, but here I am.” She has no memory of the actual fall:

It is the place where I fell.

Shallow (it looks from here)

All silt and weed – those duplicitous bedfellows.

I stare at the stones, the rocks

that caught the fall of me:

But in catching me, they broke me.

This long opening poem is a tour de force; of drama, pain, near-death, survival. Lock has entered a world of membrane, humus, mulch, sediment. You wonder about the collection’s title, Lure.  A lure helps catch a fish. Has Lock been somehow lured into the pond? “I am back to that moment, / lured / as if my reflection has slipped, sideways / in time / and I am falling into the unretrievable.” I view this collection as an act of exorcism. Certainly Lock invokes saints, even at the moment of her fall:

On that day, I prayed, if it was prayer at all.

To Brighid, patron saint of poets …

She, Brighid, I believe, held me

in that moment when I fell.

She also wonders about an “unseen naiad” within “the lens of the whirlpool” as she struggles in the water, coming to the surface, and then going under again. Brigantia, “protector of waterways”, is also summoned up. She tries unsuccessfully to grasp hold of heather on the bank. Eventually she grabs hold of a root, and hauls herself out of the pond. She crawls along a path, in too much pain to call for help. Eventually she is found, and paramedics arrive: “I am raised, placed and braced / fixed and flattened on a board.” She is kept horizontal:

Rolled from side to side, log-rolled

they say, from board to bed. Wheeled

from screen to scan, never upright.

from waist to face, nostrils of every size.

In her hospital bed she likens herself to “a snail on the garden path, / the fragile shell of me is crushed”. She receives the news that she has seven spinal fractures: “They are stable, for the time / the precious cord untouched.// It’s good, it’s bad, it could be worse, / they say all of these things.” Back home, she cannot rise. Nurses “bring me rainwater to bathe my broken wings.” The physio begins: “I have every human-engineered aid: / a brace for back and neck,/ a pair of walking sticks, / A toilet seat, rails on showers and doors.”

Ophelia, a name that this reviewer and no doubt other readers had had in mind from the outset, is invoked, as the poet relives her nightmare in her dreams:

She is Ophelia in the Hogsmill River,

in the Gower Street bathtub, as still

as the woman lying on the oil surface

of a painting, framed at the Tate.

But I am neither mad with grief for love

or romantic for the ways of death.

She is walking again. In ‘A New Season’ she collects healing herbs by the wayside, as “Each day, I learn the walk of pain along this track”. Then the season changes: “The edge of the pond is slippery again.” Winter comes with snow, but “Fault lines diminish as I heal.” Finally, in a lyrical ‘Epitaph’ that is not the poet’s own, she leaves the millpond “to the blackening clouds of Royd’s Edge, / where the grouse can be heard / batting their wings in the heather.”

I’d like to conclude this review by quoting, for remembrance, from earlier in the collection, when Lock records the first words she wrote down in hospital, in pencil on a scrap of paper, the final line of which read: “In ecstasy – the gift of life – still mine.”

This is a collection of poems – published with customary understated elegance by Calder Valley Poetry - that Alison Lock clearly needed to write, when the time was right. It combines a beguiling depiction of nature that drags us down with her, under the water, before surfacing to reveal the power of our own human world of medical intervention to rescue, and mend.

It is, in its own way, an amazing story.