Sources of creativity: interviewer Andy N looks back at five years of podcasts 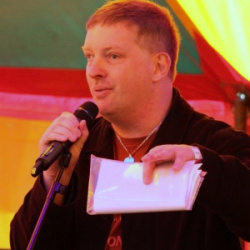 Poet and writer Andy N last week took part as a featured guest with his partner Amanda Steel in a virtual poetry open-mic night at Sale Write Out Loud. The technology didn’t phase him, since he has been running a podcast series, Spoken Label, for several years, in which he interviews and records sessions from authors, poets, artists, musicians in the north-west of England and beyond.

Andy, who is based in Manchester, said: “Spoken Label began off as a one-off chat with a friend in a pub, just after my last band finished. I remember talking to my friend and trying to explain to him I had recently got an iPod and was listening to lots of American podcasts in work (perks of my job) and after finishing chatting to my friend, I thought, why don’t I do another - and it snowballed from there.

“I had kept a blog before and interviewed quite a few bands over the years - but person to person or over Skype, then Facebook as time moved on, I’ve learned is a very different altogether. I’ve had someone turn up to meet me who I didn’t know, literally shaking with nerves, and another who had drunk enough I could smell it on their breath and I was worried the café we were in would throw us out.”

Andy said Spoken Label had developed over time, as a platform for writers and artists to express themselves: “It has taught me a lot about how to chat to people and encourage them to tell their stories. I never set out planned questions, but always like the writer to tell people where creativity originally came from, then we take it from there. I don’t like timing them, as I never know what we will end up talking about. This can be anything; from digital photography to Jack Kerouac and then why Han Solo should have been killed in Star Wars 7, before returning to poetry within the space a few minutes.

“It was never intended to be a long-term project, but after chatting to a few people, it became monthly, then fortnightly, then for the past two years or so, close to weekly. Over time too, I feel they have got more and more popular as people have become more aware of podcasts in this country.”

He added: “I never realised it would almost end up taking over my life and I can remember my partner Amanda saying to me some two years later or so, that she kept expecting me to run out of people to chat to. That hasn’t happened and Amanda sometimes sits in on the sessions now. We also co-run three other series (Reading in Bed – our book review Podcast, Comics Unity – comics with our friend Michael - and Koll, Andy N and Amanda – a general chat show), all of which are run from our study using the same equipment and each of their own structures. Spoken Label was first however and I can be found frequently on Sunday, researching writers/artists in between doing my own writing. I wouldn’t have it any other way.”

You can find Andy’s Spoken Label series, and his archive of around 170 recordings since 2015 here

In the virtual world Andy is the man to step up. Trust me. 😁