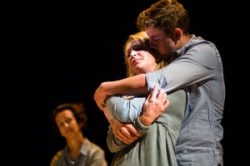 The Hundred Years’ War, a touring production of modern war poetry in performance inspired by the Bloodaxe anthology, has the barest of sets – a table, two teacups and saucers, a few stools and an accordion – and closes with the same poem, ‘Grass’, by Carl Sandburg, that is also employed in the opening sequence:  “Pile the bodies high at Austerlitz and Waterloo / … And pile them high at Ypres and Verdun. / Shovel them under and let me work.”

The relevance of the teacups on the set comes out as two women speculate about life on the western front in Marcel Martinet’s 1917 poem, ‘The women say …’ translated from the French by Michael Copp: “If it was as they say, don’t you agree, / So Horrible, / We couldn’t bear it, / We are not so hard-hearted, / It’s just not possible.” The universal nature of this production is emphasised by the number of translations of poems that may well be getting a public hearing in this country for the first time, from German, French, Russian, Vietnamese, Hebrew, Hungarian, Polish, Pashto, and Croatian.

It occurred to me during this unsparing show by performers Miriam Edwards, Jill Dowse, and Zachary Price, that we may be developing an almost cosy familiarity with our (deservedly) well-loved first world war poets, and that a selection of poetry from more recent theatres of war and terrorism comes as a necessary corrective, a reminder that the horror goes on and on, there can be no distance from it. Consequently, this production is heavy on modern atrocities such on terror bombings, so much so that an audience desperate for light relief found itself amused by the black humour of Vietnam veteran David Connolly’s poem, ‘No Lie, GI’:

So when he got hit

And he asked me,

I looked him straight in the eye

It looked fine to me,

Looking as good as new.

In the second half the almost unrelenting shock and awe of the material is leavened by poems such as David Constantine’s wonderful tribute to those women who kept the home fires burning, ‘Soldiering On’; and ‘Rain’, by Edward Thomas, about one man contemplating his imminent death, in solitude, as he listens to the rain. The final two poems in the anthology, by Imtiaz Dharker, about schoolgirl Malala Yousafzai, who survived being shot in the head by the Taliban, and drummer Lee Rigby, hacked to death on the streets of London, also provide a measure of consolation and hope at the beginning and end of this production.

Disappointingly, the audience at this evening at Newbury’s Corn Exchange was small enough to be fitted on to the stage, along with the performers. This hand-to-hand closeness and intimacy made the experience that much more inescapable, unavoidable. It was impossible to look away.

Listening to and watching the performance of 35 poems taken from Bloodaxe’s The Hundred Years’ War anthology certainly does not add up to a fun evening out at the theatre. How could it? But it does represent an honest and praiseworthy attempt by all those involved, including director Steve Byrne and executive producer and poet Jonathan Davidson, to remove the protective curtain of TV and armchair, and demonstrate the relevance and importance of poetry in portraying war in all its horror and pity. Don’t take my word for any of this. If you can, you should leave the comfort of your home, and go out and see it for yourself.

◄ 'Democracy can never be defeated': Amanda Gorman is youngest poet to perform at inauguration

How to Make Curry Goat: Louise McStravick, Fly on the Wall Press ►