How to Make Curry Goat: Louise McStravick, Fly on the Wall Press 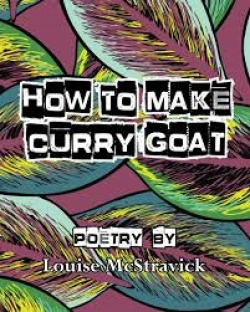 Louise McStravick describes herself as “a writer, a teacher and proud Brummie”. She is also a slam-winning poet and performer, and has said in an interview: “I started out doing spoken word due to the classic story of being put off by school. It was like anything I wrote could never be ‘real’ poetry. The spoken word community really showed me what could be done with words and the diversity with the ways things can be expressed.”

Her collection How to Make Curry Goat certainly contains plenty of ‘real’ poetry - detailed, observant, and often lyrical. Her father is a member of the Windrush generation. As she explains in ‘Fatherland, Motherland’, “I am British, English, a bit Irish and Jamaican”. She writes about the days of slavery “on the day of my grandmother’s wake”, but sees herself as “a distant relative and stranger / to a culture I’ve longed for since I can remember.” This feeling persists:

So here I am

in the fatherland, 7 miles of white sand,

intertwined with the music of the waves and sellers calling.

Wondering if this is where I belong,

or am I wrong to feel part of  it

an imposter with my

She concludes: “I thought I was culturally Jamaican / but I realised since I arrived, being second generation / has different connotations.”

Cultural tastes often feature in this collection. ‘Pasta, pesto, rocket and tomato’ is about a lover who introduces her to new shopping and eating habits before walking away. She discusses the class symbolism of ‘Earl Grey tea’: “2018, proper adult cohabiting, he would choose / Earl Grey before breakfast, naturally”, and relates it to accent: “I have a degree in English, don’t you know. / My voice sounds like I’m stoned, they told me, / can’t you be less Brummie, it’s a bit deep, doesn’t go.”

There is a sense of mourning in ‘Spices’:

There is no place

they have nowhere left to go.

There is a generous variety of subject matter in this collection. ‘On the London Northwestern’ heading home to Birmingham, thoughts turn to sex. Betjeman would have been shocked. McStravick experiments with layout on ‘Neural Pathways’, a poem about sunrise, earth and stars, with the poem eventually exploding across the page like the stars in the sky. Her opening, long poem ‘Just another road in Erdington’, is vivid, fast, and dramatic, and reads like a script for a TV documentary:

J’s house got rushed once and they locked his mom in the cupboard.

I heard. Nothing is sacred.

Our house got rushed too. I no longer answer front doors.

A prose poem ‘Gaudi would not have approved’ is about the ‘problems’ of straightening hair, that becomes a celebration of the maverick Spanish architect’s buildings “trying to bend themselves away from the earth, against their better judgement”.

The title poem begins as a long recipe, interspersed with her father’s patois advice and qualifications:

Take around 7 quid’s worth of goat

A spring of thyme, two large onions, three if you’re that way inclined

A bulb of garlic. All-purpose seasoning and Caribbean Curry Powder

It nah matter which curry powder you fi use.

Be careful with the All Purpose. You nah want too much salt.

She remembers her father cooking it for her, warning “It nah ready yet!”, before, finally, “He calls you to taste, it tastes better than great / it tastes like from the plate of his mom I never knew, / his gran, my namesake”. The poem ends by looking forward to a continuity of cultural and family knowledge and identity:

One day I will tell my daughter, my son to stop asking questions

I will move slow with hands that think with this memory.

Intuition in the acquisition of learned rhythms.

Until. Our story rises with steam from the plate.

The title poem is powerful, moving, and assertive, and reflects a cultural confidence, of both heritage and class, that runs through this collection - a rich concoction of ingredients and flavours.

Louise McStravick, How to Make Curry Goat, Fly on the Wall Press, £8.99

The 'man in the cardigan' was gently ribbed by Ian McMillan. But does he have a point? ►