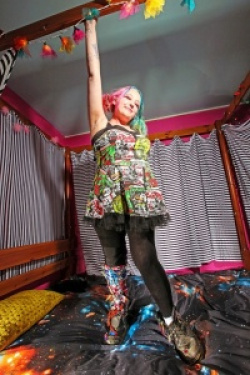 The force of nature that is poet and writer Jackie Hagan performed her show Some People Have Too Many Legs at Manchester’s Contact theatre to an adoring crowd of family, friends and fans. She said it was like looking at Facebook, with so many familiar faces out there.

Her stand-up/sit-down show tells the story of her shocking experience over the past two years where a mysterious condition caused multiple blood clots in her right foot, followed by a failure to heal despite treatments with maggots, leaving amputation the only option, first of her foot and then the rest of her lower leg.

She has talked about it before, here on Write Out Loud, on radio and TV, and in the pages of Chat magazine. But hearing her talk so intimately, profoundly and humorously was all the more moving. She interspersed the story with excerpts from her childhood which were both hilarious and heartbreaking. And she doesn’t ask for pity - she just tells it like it is.

On a set like a cross between a white bower and a hospital ward, using a wheelchair as a prop, she stood there - all multicoloured hair, glittery makeup, tattoos and a fabulously decorated prosthesis - and let rip, supported by a signer, Jan, who was accomplished and funny (Hagan flung in some challenges for her including “minge” and vulva”). They made a great double act.

She gave us all “rave glasses” so we had some sense of what she saw under the influence of morphine combined with her unusual eye condition called Fuchs’ Syndrome (I know, you couldn’t make it up) which had previously led to her mistaking a church clock for a glorious full moon and admiring a seashell, only to find it was a pile of sick.

My notes read like a stream of consciousness session with a psychiatrist – associating Jedward with psychosis; being named after one of Charlie’s Angels instead of a saint; remembering the smell of glue as pieces of chamois leather were patched together to make dusters; cut-out headlines around her hospital bed including ‘a ghost sat my A-level’;  Edna in in the next bed  who hated everything but was lovely; being taken to the Brookside set, only to find out later than no such trips existed, she had just been taken to any old cul-de-sac. Her childhood ambition to be a “duck trailer” (finding ducks by following their footprints, obviously). Watching ’Allo’Allo’ with her dad, who tragically lost  his own foot and then died leaving her bereft and determined not to think of him again. The gifts from friends after her surgery of a pirate costume, a chorus of One Foot In The Grave, and a one-legged gingerbread man. And so it went on.

Hagan’s decision to tackle her crisis head-on, inspired by the twin strengths of optimism and imagination instilled in her by her family, meant she eventually established emotional contact with her late father  (touchingly acted out with two cuddly toy amputees) and describing how her boyfriend laid a trail of webbed footprints through her home leading to a gorgeous yellow duck.

At the end she described coming to terms with her stump and learning to love it despite its bizarre appearance - and then revealed it in all its comic glory before drinking bubbly out of her prosthesis.

This was a genuinely heart-warming show that left us loving her even more.

Background: the Write Out Loud interview

Congratulations! Here are the names and poems of all the poets in the anthology ►

My first ever poem on here was spurred by a writing exercise by Jackie that was on the front page of Write Out Loud, when I first found this place, so I will thank her for evermore for that. I love how she's taken this hugely traumatic event and used it to create art. That's a proper poet is that :)