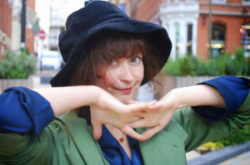 A university has paid tribute to a former creative writing MA student and innovative poet who died at the age of 29 last year, by inaugurating an award in her honour.

Salford University has set up the Leanne Bridgewater Award for Innovation and Experiment for graduates on its creative writing: innovation and experiment MA programme. Leanne graduated with a distinction from the course in 2013.

Her tutor, Scott Thurston, said of Leanne: “What struck me in the weeks and months after her death was just how far and how wide-ranging her influence was felt amongst many in the experimental writing and performance community.

“There was something utterly exceptional about Leanne. I think she may be the only student we ever admitted to the Masters programme without an undergraduate degree because the standard of her creative work at that point was so high. She had a real visionary way of taking her fascination with words and language into many different areas of her life so that there was a seamless continuity between writing, performing, drawing and painting, talking with friends and her extensive and courageous work as an animal rights activist.” 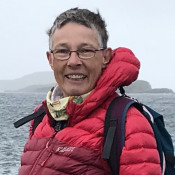 The first recipient of the award is Jo Somerset, a Manchester-based nonfiction writer who found a voice through Northern Gay Writers in the UK. Her poetry and vignettes have appeared in Clav Mag, anothernorth.org, Dear Damsels, Buzzin Bards, The Selkie, and Generations anthology. Other publications include ‘Passion Prioritised’ in the Diva Book of Short Stories (2000) and ‘Pushing the Boundaries of Feminism in a Northern English Town’ (Northern History, March 2018). She said: "I’m honoured to get this award, but it’s got a bittersweet tinge - Leanne sounds like an amazing person, and it’s so sad that she‘s not still around. I’d love to have met her. However, I’m proud to be following in her footsteps."

Scott Thurston also wrote about Leanne shortly after her death, when he was "still trying to come to terms with Leanne's loss. I had the amazing privilege of meeting and working with her when she came to do her Masters in Creative Writing at the University of Salford in 2011. The subtitle of the programme is 'innovation and experiment' and Leanne embodied these qualities in an extraordinarily full and vivid way. Within a few months my office began to fill with the most remarkable objects and contraptions - her 'homophone translator' - a homemade console with a phone receiver through which you could listen to her reading a text she'd translated into eight different languages, and then back into English! - a card spinner (like an actual one you find in shops) stocked with her hilarious set of alternative greetings cards (later published locally) to celebrate events for which there are not usually cards - 'congratulations on your accent change' 'the day of no electric' 'lazy day - be a couch potato' 'A day for Nature' - and a four by four foot stretched vinyl canvas with a single long poem on it (which I still have and look at every day).

“Alongside these unique visionary objects, I was lucky enough to see Leanne in performance several times at events like The Other Room and witnessed her autodestructive performance of demolishing a ten foot plywood obelisk - I still have some souvenir fragments. Leanne was such an original, bold, fearless artist who refused to recognise or be held back by the standard boundaries or limits. She seemed a true 'blithe spirit' - so joyful and wildly entertaining to be around - although, like others, I did not guess at the dark depths that she had to negotiate to balance the heights she soared to.”

Leanne’s sister Donna said she was a “super proud sister” after hearing of the award: “She had a big passion for poetry. I used to misbehave and miss college and she would miss school to go to the library in Birmingham (very naughty). She would write poetry in books and I would read books on photography next to her. In her 29 years she achieved so much. She had never been to university and while living in Manchester a few years ago she decided to do a Masters course in creative writing. She succeeded and got very high grades. She was one intelligent lady.”

Scott Thurston has given Write Out Loud permission to publish a poem he wrote for Leanne after she died, and which he read at her wake after the funeral in Coventry:

‘as if these moments always last’

Blithe spirit – a thought of you is a fox,

A bird, a flower emerging from the rubble.

Surely took many forms before you chose

This one and made a world out of each

Where you were, nesting in the upper room.

What exchange has taken place and why did we

Have to surrender you to the air? Is it that you

Stooped so deep, like a falcon, as to make your

Soar peak, the fall furthering the flight in you?

I’m not sure I can accept that affliction shall advance

the flight, but you flew the coop way too soon,

leaving us speechless as the sky, leaving us

with so much to remember you by.

◄ Pre-order a copy of our anthology for these strange, heartbreaking, inspiring times

I met Leanne twice I seem to recall and remember her been a very creative and interesting lady but I know more than a few who really knew her and she was that loved. It upset a lot of people I know when she passed.

How very sad. She sounds like a special and very loved person.