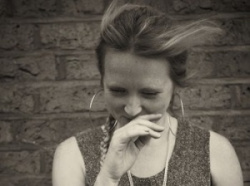 I was expecting her to be polished and professional. I was expecting her to be entertaining and enthralling. What I was not expecting was to be laughing like a drain for the majority of her show. Hollie McNish is full of surprises, and every one delightful. An internationally renowned artist, her YouTube videos have been seen by hundreds of thousands of people. Two of her poems, ‘Embarrassed’ and ‘Mathematics’, went viral and have each been viewed well over a staggering one million times.

Unassuming both in manner and appearance, Hollie’s smart and funny observations establish an instant rapport with her audience. There is no massive ego at work here. There is, however, a self-assured inner determination and belief in her own poems and values, and this rippled out through the theatre.  But I’m getting ahead of myself.

A word about the venue – Manchester’s Dancehouse theatre is a fantastic space for this kind of gig.  With an attractive art deco interior, it gives an impression of intimacy yet has a capacity of 430 – of which I would estimate at least 400 were in attendance. That is both surprising and encouraging given it was a Wednesday night, and we are here to see a poet on tour! It warmed this poet’s heart, to see our art form attract so much positive attention.

The coveted support slot was more than satisfactorily filled by Keisha Thompson, who treated us to such delights as her Caribbean mum’s dreams about fish, and powerful questions regarding the kidnapped Nigerian girls. She also established an immediate connection with the audience, with her self-effacing demeanour and quiet humour, and her flow and delivery were spot on.  She has a solo show coming up at the Contact theatre in Manchester on 5 and 6 May, from which she performed an intelligent and thought-provoking poem about societal expectations of female appearance. Her first and last poems opened with a few bars of songs sung in a full and velvety tone, which set up a wonderful contrast between song and speech. If the rest of her show is as good as this, you really should go.

There was a heart-warming camaraderie between the two women, as Hollie stood in the wings watching the show and briefly chatting every now and again when Keisha turned to her to confer on certain matters. It felt like sitting with friends, like being a part of the warmth between them. Lovely.

Hollie opened with a conversational, almost confessional, observation about how on earth she was going to fill a whole hour, and proceeded to have us in hysterics with her ideas.  I had wondered the same thing, knowing as a performance poet myself how easy it can be to lose a crowd’s attention after a certain amount of time. Poetry has to be listened to.  There are no jolly choruses to sing along with, no guitar solos to lose yourself in or drums to dance to, so it takes real stagecraft to keep a poetry audience with you, to keep the flow such that it stays exciting until the very last word.  She did this, and so much more. That one hour flew by. Pretty damned impressive. And not a ukulele in sight!

Something that took me completely by surprise was the amount of swearing. Now, anyone who knows me knows how defensive I get over swearing.  I see it as personal expression, so I was delighted with the abundance which scattered her introductions and filler – beautifully balanced, well timed, and incredibly funny. I knew some of her poems contained certain words, but did not imagine she would be so free with them outside of the poetry. The family anecdotes about ancient Glaswegian grannies who share that predilection for profanity had the crowd roaring with laughter.

A comic disdain for a “narrative arc” produced an imaginative structure nonetheless, playing on the negative, often misogynistic, comments left on her YouTube videos.  She once again had us rolling around helpless with laughter at her reactions to the internet trolls.  Her response in the form of a beautifully composed show is one big two-fingered salute to her armchair adversaries.

All the favourites were in evidence, putting a comforting lie to the worry of many a performance poet about repeating yourself and boring the audience. Covering issues such as immigration and breastfeeding, making wry comment on rap videos and London-centrism, these are poems that have been listened to repeatedly – and people want to hear them again, and again, and again. Chockful of ideas, the words flow so quickly and smoothly that you simply cannot catch them all, and you know you want to hear them again, have to hear them again to satisfy the inner longing for the whole story.

I have to say too that her delivery of such complex poems is impeccable.  It’s easy to fudge it with a video.  You can perform in private, in a comfy place where your throat isn’t tight with nerves, repeat fluffed sections, start again, edit the film etc. But when it’s just you, a mic, and a theatre full of expectant ears and keen eyes, there is no escape, no refuge. To deliver such density in such an articulate and relaxed manner takes a huge amount of skill, as well as experience, not forgetting that all-important practice.

After her last poem, when she could so easily have stuck around for ages enjoying a thoroughly deserved standing ovation, she instead simply walked off to man her own merchandise stall in the lobby. I mentioned the lack of ego earlier, and this conclusion to her show only confirmed that for me. I really wanted to speak to her but she was thronged by eager fans by the time I got there, so instead I’ll say it here.  Hollie, you knocked me for six girl, long may you continue to grace stage, ear and eye space across the land. You are a total inspiration, as a woman and as a poet.

Background: the Write Out Loud interview

Good article Laura, I have been looking for some insight into the current flap, PN Review etc, and this balances the argument, for me anyway! Dom.

Nah, not advertising. Reviewing though, you do so well. More please!

Thanks chaps for your comments and glad you enjoyed the review :)

'Racy enthusiasm' Harry? Heh - liking that ;) I don't think I'm really cut out for the advertising world though. I can only 'sell' what I seriously enjoy ;)

If you get the chance to see her - just go.

That's a great review of a wonderful poet, and makes me wish I'd been there.... Nice one, Laura!

Laura,
I like the racy enthusiasm of this, and particularly the way you lead into your paragraphs. There seems to be
a career waiting ahead of you as some sort of advertising
writer (you certainly demonstrate how to `sell` what you
are writing about.) This makes me sorry I missed the gig.

Laura, this is a wonderful review of a wonderful event. Amongst many great observations, you point out that a poetry gig attracted 400 audience members on a Wednesday night. The popularity of this poet – and of poetry in general – is surely something that we should all share your delight about. As I'm sure you know, Hollie McNish's poem, 'Mathematics', has built up almost 2 million 'Likes' on Facebook (an astounding 1, 905, 688 the last time I looked!). I think her poem demonstrates the importance of poetry to our culture and society in a very special way: Hollie puts her poetic finger onto a bone of contention which affects so many of our lives. By directly challenging the simplistic view that each immigrant to the UK 'steals' a British worker's job, she articulates an argument that very many of us have had to make in the pub, in the street, on social media etc. She's given us peaceful ammunition for that battle and a secure point of identification for now and the future. Also, by answering that reductive view with the intricate imagery of her poem, she's given us one of the most perfect and pleasing examples of unified form, content, context – and political purpose. Thanks for helping to bring this to yet more readers' attention, Laura.

Thanks chaps :) It was a total pleasure to write this review - was so charged up with enthusiasm it just flew out of my fingers! :D

A really well-crafted and very readable review, that knocked me for six, Laura.

Thanks for this wonderful review, Laura. You really capture the excitement and joy of the gig in a way that old guys like me maybe can't!