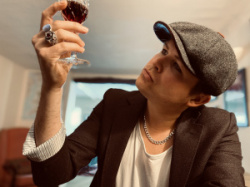 Indefatigable performance poet Luke Wright notched up his 100th consecutive spoken word show since the lockdown on Twitter last night – and now he’s finally taking a break. Luke will be switching to performing weekly on Sundays after enjoying a well-earned, nine-day break following his ton-up marathon, all broadcast from his home in Suffolk.

In an interview with Write Out Loud when he was approaching his 50th consecutive show, he explained: “I like the routine, it gives me some structure to my day. And I like to connect to people. And show off. It’s mainly just my pathological need to show off.”

He has also found the time to work on a new show, taking “old Georgian street ballads, which have the most amazing characters and giving them a new lease of life. These ballads are great fun to write, but in-between home schooling my kids and taking almost obsessive amounts of exercise I don’t have nearly as much time as I’d like.”

Looking forward to his break, he said: “It’ll be lovely not to banish my kids to their bedrooms at 7pm while I go and prep. Although of late I’ve been able to whittle the prep down to about 20 minutes.”

Enjoy your break, Luke, and thanks for all the shows!