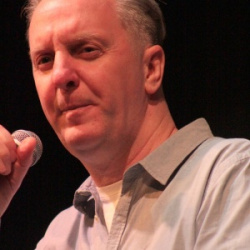 One of spoken word’s leading ambassadors and heroes, Tony Walsh, came down south from the north-west on Thursday night to tread the boards of a former Victorian music hall in London.

Walsh was topping a bill of novelists, musicians and poets at Book Slam, a popular literary night club that has been running since 2007, and moves around the capital. Other stages have included a boxing ring in east London, but the Clapham Grand is its most regular home.

Judging from the length of the queue to have copies of Walsh’s Sex & Love & Rock&Roll signed afterwards, the 200-strong audience certainly took to Longfella. He read a number of poems from the book, including the intimate ‘Let’s Make A Love’, and ‘A Girl, Like, Y’Know’, written in the voice of a teenage girl. “If I’m known for a poem, it’s this one,” he said.

These are poems that leap off the page, onto the stage, their true home. Walsh’s poetry has an epic quality, as if he’s trying to cram in everything there is to say on a subject. And it may be performance poetry, but it ain’t noisy. The audience listened in respectful silence; you could hear a pin drop during his long, meaningful, risk-taking, pauses.

Walsh, a one-time council housing officer as well as a former Glastonbury poet in residence, is a man of passionate beliefs. During the performance of ‘Rock&Roll’, which can be taken as a positive update of Don McLean’s American Pie with its references to great moments in popular music, he talked about the heady days of 1976, and the ground-breakings songs of Ian Dury and Tom Robinson. And, in the manner of a gospel preacher, he had the audience shouting: “I believe! I believe!” at regular intervals, as he extolled the power and joy of rock n’ roll. For Tony Walsh is a believer; he doesn’t do cynicism. And he gets you believing, too.

Also on the Book Slam bill was rising star Samantha Shannon, reading two extracts from her dystopian novel The Mind Order, “about a London I’ve invented”. Her debut novel, The Bone Season, the first in a seven-book series, was a New York Times and Sunday Times bestseller.  Another writer, Vancouver-born Eliza Robertson, read part of a short story about a flatmate from hell, ending it at an unexpected moment in the plot.

Music was provided by Games, a duo from Brighton, on vocals and keyboards, who did not speak to the audience between their mysterious, atmospheric, moody yet enjoyable numbers.

First to appear was young Italian poet Sofia Mattioli, who, we were told, was reading her poetry for the first time in public, anywhere. To be fair, she did not seem particularly daunted by the occasion, although maybe she needs to work on some intros. The whole shebang was hosted by Australian compere Felicity Ward with verve and panache. You think you’d be safe in the front row of a literary night club? Not a bit of it.

It’s certainly a magnificent venue for getting poetry to a wider audience. And if any ghosts of Victorian music hall performers find themselves shaking their heads at the art forms now appearing on their stage, I’m guessing they would recognise and applaud the engagement with an audience that a poet like Tony Walsh espouses – and hail him as one of their own.

◄ 'A man trying to extricate himself, afraid to open his eyes'

Well done, our Tony! You are one of the best ambassadors for open mic poetry, even though you have gone well beyond that yourself. No ladders pulled up behind you; your past is - in terms of your poetry career - your future. the way you weave your own story into everyone's story is what, for me, makes you so special. Your most poignant line, I find, is:
posh things, like dads and that

a story in six words.

long may the flame live.