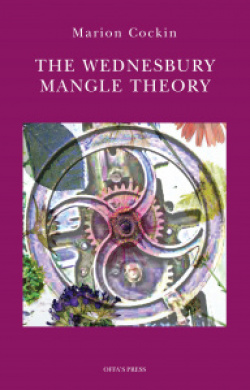 According to the Oxford English Dictionary, the first recorded use of the word ‘mangle’ in English dates from 1598 when John Florio, in his dictionary A World of Words described it as “a kind of press to press buckram, fustian or dyed linen cloth, to make it have a luster or gloss”. In the second half of the 19th century, commercial laundries began using steam-powered mangles or ironers. Gradually, the electric washing machine’s spin cycle rendered them obsolete but they were certainly a feature in many middle class households during the first half of the 20th century for wringing water out of laundry. None of this knowledge is necessary to gain an appreciation of Cockin’s opening poem but it does help to put it into context. The poem begins and ends inside a cupboard where the mangle is kept when it is not in use. In between these opening and closing lines, Cockin wrings out a swathe of scientific discovery culled over centuries with reference to Galileo, Newton and chaos theory:

Newton had an apple.

We had a mangle handle

and its repeated falling to the ground…

There are other things to discover in this pamphlet of 26 poems, scientific or otherwise. In ‘The Mouse’s Tale – a Nursery Story’ use is made of a possible counting rhyme to describe the thoughts of a mouse keeping watch over the young mice depicted on the clock face of the astronomical clock in Exeter cathedral.

Living forever is not easy.

Listen to my story.

The Latin phrase, a favourite motto for clocks and sundials, derives from Martial in his poem ‘Character of a Happy Life’ and is usually translated as “they perish and are reckoned to our account”, referring to the hours that we spend, wisely or not. Cockin’s use of the archaic spelling of the word ‘laid’ (‘layed’) underscores the antiquity of the clock which dates from the 15th century.

‘Where’s Yer Oss?’ brings us back into the 20th century with its description of first and last days at school. Time and the seasons, changing trends in school uniforms and the pains of growing up flow through this poem with effortless ease. The clock, in this poem, is ticking very fast indeed.

One of my favourite poems in this collection is ‘The Magpie by Claude Monet’. Here, time has been stretched to infinity. The scene is depicted through the eyes of the magpie who watches Monet “fiddling with tubes of colour / sighing at the changing of the light.” The magpie is immortalised the moment the painting is finished:

Little did I know,

I would live forever, claws

The whole idea is cleverly thought out and makes for such a rewarding read.

The magpie poem forms one of a sequence of three poems on the subject of art and artists ranging from Cockin’s humorous account of her own attempts to draw “with crayons and paint and chalk” to the austere simplicity of Mondrian’s “angled lines”.

Writers are also referenced in a sequence of three poems concerning Christina Rossetti, Virginia Woolf and a meeting between Hans Christian Andersen and Charles Dickens.

In ‘Wyre Forest Dipper at Dowles Brook’ Cockin writes about her love of the natural world. While her companion only has eyes for dippers, (and Dowles Brook is noted for being dipper territory), she sees so much more in an autumn emblazoned with yellow fallen leaves and hears “the green hush / of the trees and the music of the water”.

There is something magical about ‘Wanderer Child’ with its echoes of the dreamtime of childhood. Memories of green expanses come alive from a past that is recalled with deep affection. There is a warmth to this collection which is tinged with all the Black Country humour that has become her hallmark. I have had the pleasure of hearing Marion Cockin recite her poetry both at City Voices in Wolverhampton and also at the Callander poetry festival in Scotland. It is good that more of her work is now in print.