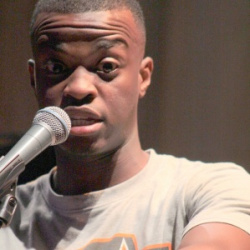 I missed George the Poet at Latitude after he sent word that he was stuck on a train.  On Wednesday night at Out-Spoken in the heart of Camden there came a message that he was delayed in south London. I was beginning to think it must be me.

Last year was a big year for George (aka George Mpanga). He graduated from Cambridge, and also signed an albums contract with Island. He has a knack of introducing a poem, and then, before you know it, you’re in the poem itself. The first one was about the dilemmas and tensions of fame, and receiving an email from the head of the BBC, saying they wanted his help “to improve diversity”.

He spoke of living in two worlds as he grew up and went to a grammar school, and of trying to keep his schoolfriends separate from his estate mates. “That was the whole contradiction I was living – my grammar school friends wanted to know, how many people got shot on my estate last night?” Another poem was about the problem of fatherless children, which he sees a key factor to life on the estates. Lines like “I had to move to a better reality, from one [where] everyone tries and fails” and “Society treats the hard-to-reach, like a single, subversive mob” stay with you.

He finished with YOLO (You Only Live Once), with its warnings about the inbuilt perils of the fashionable philosophy of his generation: “Some of that dumb stuff’s irreversible”, and the observation that “breathing is a luxury, and I could die today”.

Earlier we were given a glimpse of another reality from Malika Booker, a world where okra were tested, yams scrutinised, and snapper selected by her mother at Brixton market; her religious aunt letting her hair down on carnival day; tough warnings from  women family members on how to deal with violent men. They were family poems, delivered with warmth, love and humour. She talked about her poetry collection, Pepper Seed: “In the Caribbean they say, ‘Don’t tell our business.’ All our family’s business is in this book.”

There was also a poignant family moment in Musa Okwonga’s set, when he held out a battered old passport, in a poem dedicated to his father, having earlier said that he was the child of refugees, from Uganda and Idi Amin. Another poet who fills his work with humour, Okwonga’s ‘The Lord’s iPrayer’ includes a plea to “forgive us our text messages”. He writes a lot about football, in places such as the New Statesman, and explained his Brazil top by saying: “I’m a poet , so I support the underdog.”

Because of George the Poet’s delayed arrival, we were treated to a bonus 15 minutes of poetry from host Anthony Anaxagorou, including a long, compelling poem full of well-argued anger, and the refrain – “This is not a poem, and I am not a poet”. He joked about someone who had referred to him as a “street poet” – “I’ve developed a complex.” And he made the strong claim that poetry had become the “most progressive” art form over the last few years: “I went to a comedy night, and lasted five minutes. Sexist, homophobic,” and you pay a fortune for it.

At the start of the night he introduced 19-year-old Ollie O’Neill as “one to watch for the future”.  A Poetry Society Slambassadors winner, she began with a poem packed with facts about sexual harassment from around the world, but also containing these words: “I know girls who could command oceans with the palm of their hand.” There was another, disturbing but ultimately uplifting poem about setting the alarm for 3pm, before she “bent the bars in my head”.

Music was a big part of Out-Spoken’s packed bill. Mention must be made of pianist Karim Kamar’s languid, sensitive sounds, cool on a hot summer night; the remarkable voice of Despita Pilavakis; and the rousing social commentary of Lester Clayton and his band.

Anaxagorou said that Out-Spoken, which has recently moved to The Forge in Camden, had been going for two and a half years. Surveying the young, enthusiastic, crammed audience, he said this was “one of the best turnouts yet”. Certainly, the spoken words received the kind of full-throated reception you don’t often hear at poetry events. Maybe I just need to get out more, to more nights like these.

◄ Still need to write more Covid poems? Here are some poetry videos that may help to inspire you